Back to the Zoo

After a few weeks of really hot temperatures (28-30 celsius), we had a couple of weeks of rain, which really cooled things off.  It's been somewhere like 10-15 celsius, almost raining, which is the best weather you can hope for June in Moscow.

Wednesday, we pulled the kids for the day out of preschool (which unlike school is available all summer, and we've kept them in just for everyone's sanity, at least it gives them something to do).

First they came with on trip to the embassy to add pages to mommy's passport (did you know you could do that?  It looks messy, but is perfectly legal, if you pay the exorbitant fee).  Of course, that was the day S wasn't carrying much cash, and the credit card machine at American Citizens Services (bullet proof glass alive and well at the teller windows here) wasn't working, so S had to take 3 little kids on a wild goose chase to find the ATM of the bank we currently use (which we will have to change thanks to a stupid US law requiring foreign banks to disclose account information of US tax payers, but that's a future problem for a future post).  After walking a mile, getting cash, walking back a mile, the kids wanted to play with the American toys in the waiting room, but the process of them taping extra pages into the center of the passport only took 10 minutes.

Then, on to the real reason for ditching preschool--the Moscow Zoopark!

Unfortunately, the sort-of threatening to rain did not completely deter enough parents and kids (all schools grades 1-11 finished the school year at the end of May), so it was a bit crowded, but hey, nothing like the last time we went to the zoo was New Year's Day when it was the only thing open in the whole city--and free that one day--it was so crowded then you couldn't move through the zoo for the crowds, worse than the metro at rush hour or Auchan on a Saturday.

The best part about the Moscow Zoo is the price -- 300 rubles per adult (thats about $8) and children under 18 are free!  Can you imagine?  A Zoo for kids where kids are free?  Of course, only "large families" like ours really benefit--most families have two or more adults accompanying their one child/grandchild--but when you pay for two and get three free, it's a great deal!

Not to mention it is a fun zoo, lots more variety than you would expect.

The downside this visit was they have really ramped up the construction which has been ongoing all year.  Lots of outdoor exhibits are temporarily closed while they do more landscaping, resurfacing walkways, and who knows what else.

First we let them play a bit in a really amazing play place: 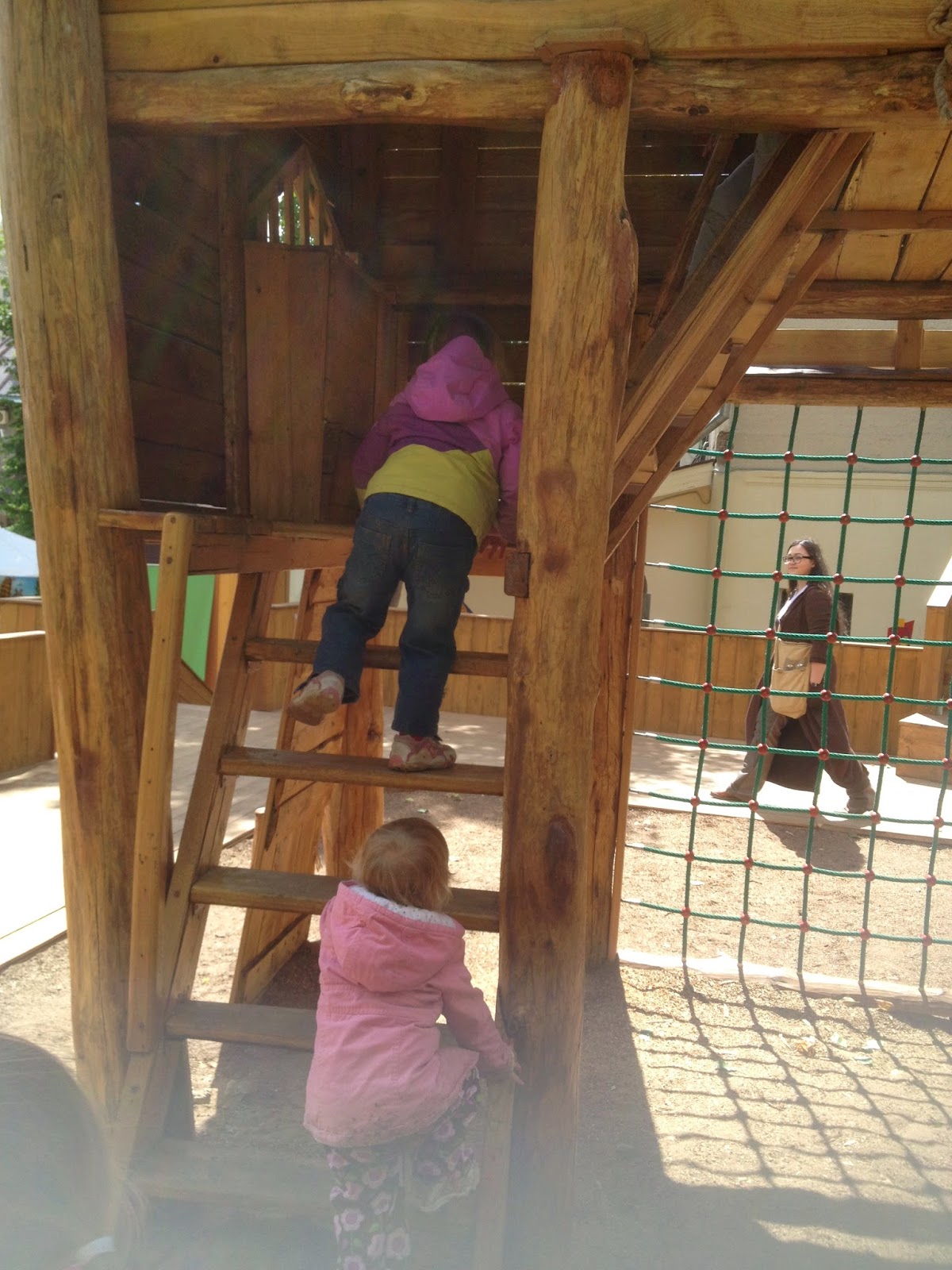 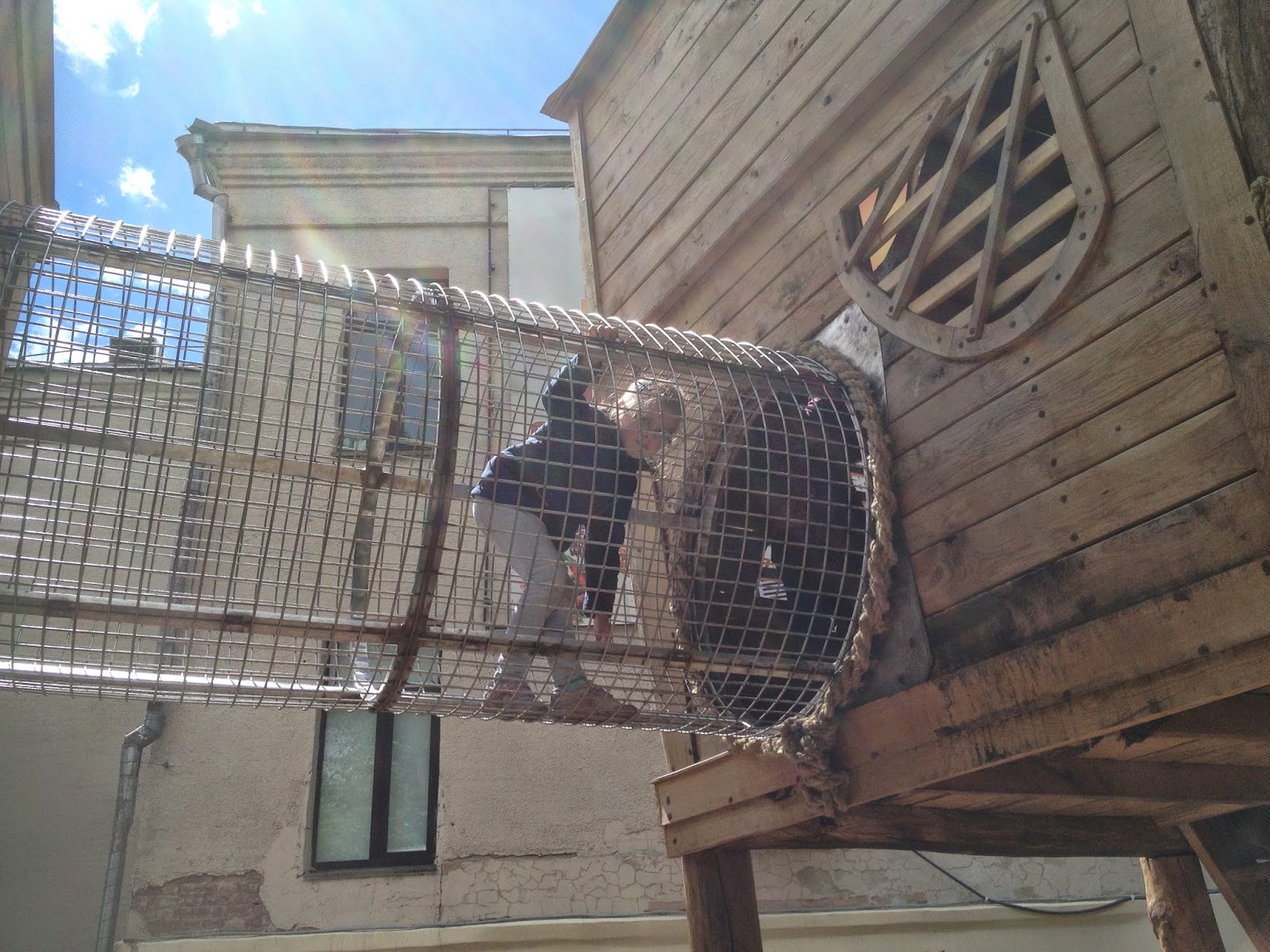 Then we rushed them past some animal exhibits (some we've seen before like the lynx & bobcats, others not, like the giraffe) in order to be on time for the Dolphin Show!  K cried later we missed the giraffe.  Of course, if she had said that was important, we would've stopped, but how could we know?

As you can see, we got front row seats: (E in blue, daddy, A in pink jacket, K in purple jacket--she is always in purple!, mommy photographer) 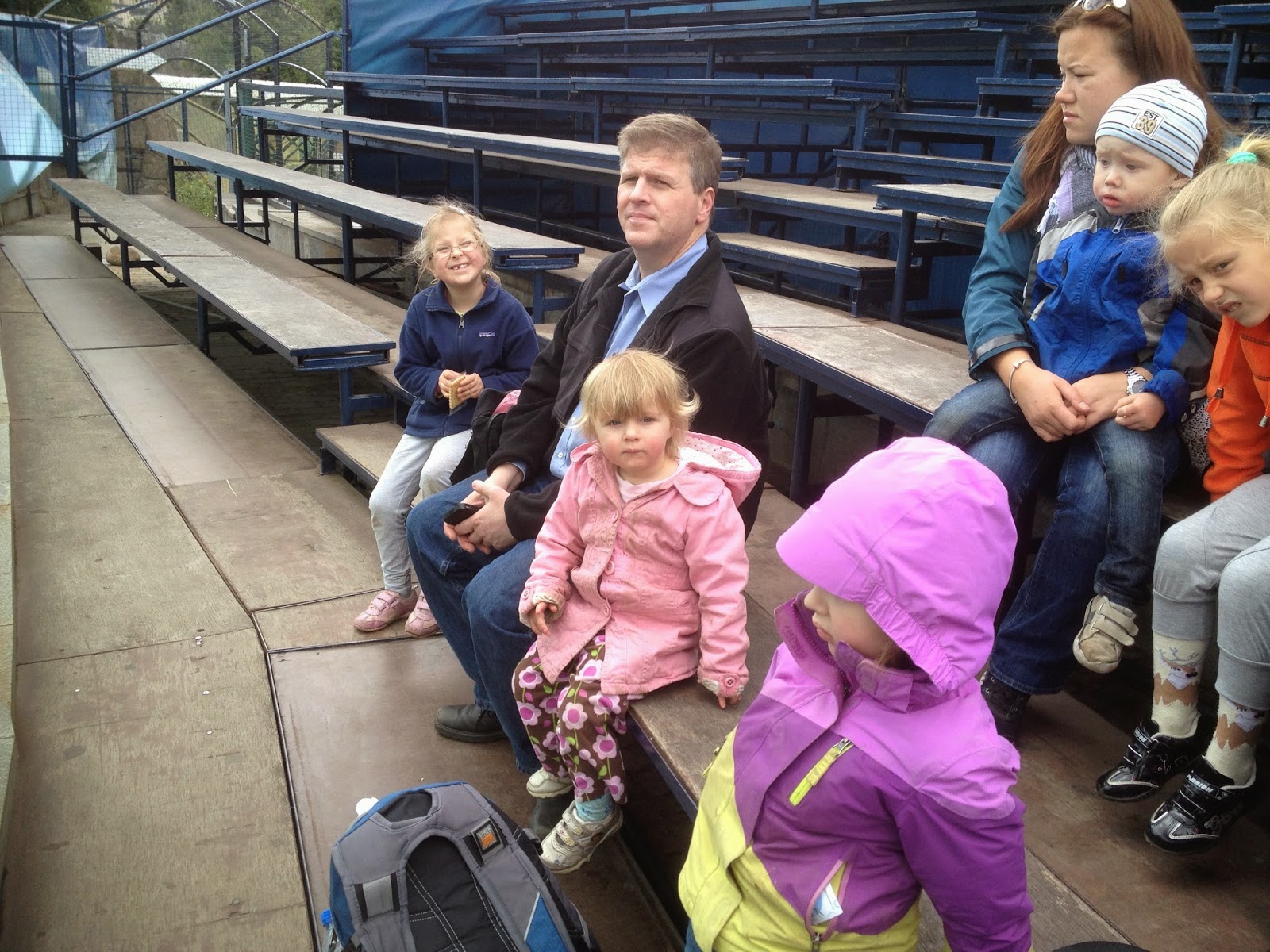 The show started with a sea lion, who sat on the rock & waved a flipper and clapped, but didn't feel like chasing the ball in the water today, so she was sent back to her pond before we could get a photo.

The dolphin, though, second up, named Linda, was having a blast.  Clearly loved doing the tricks (here she is carrying one ball in her front flippers, and another ball in her mouth, moving across the pond vertically, using only her back flippers): 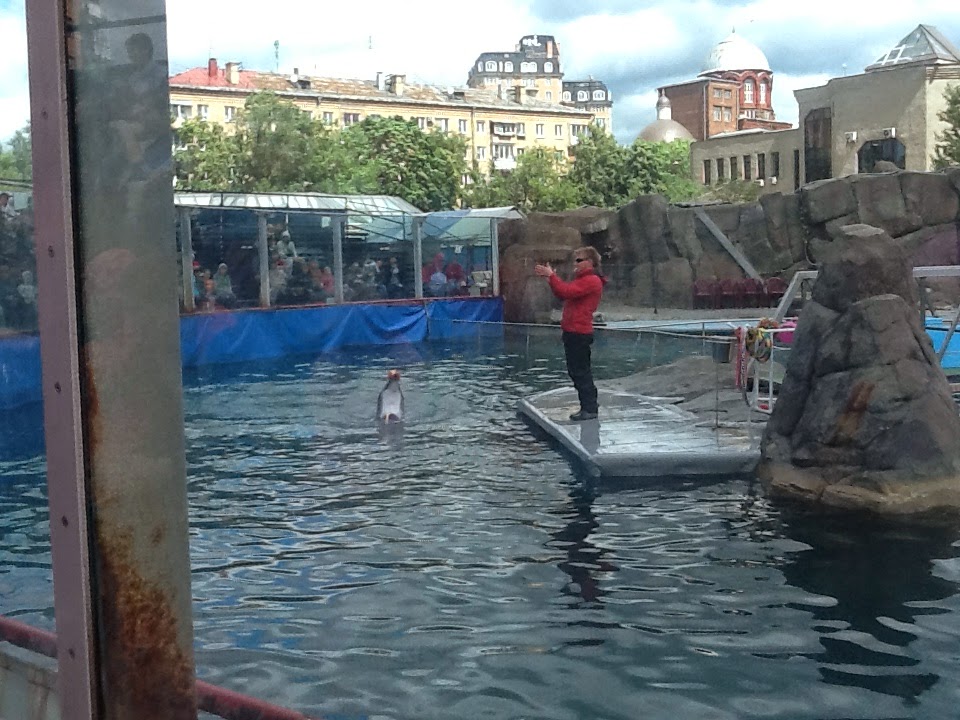 and loved her treats: 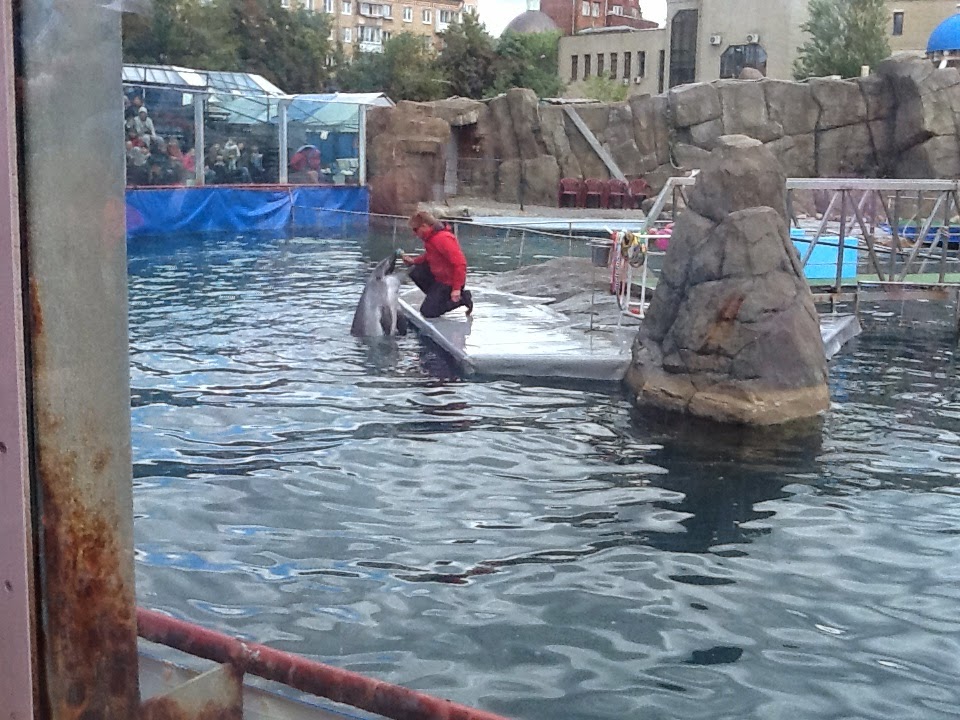 and loved her "strokes": 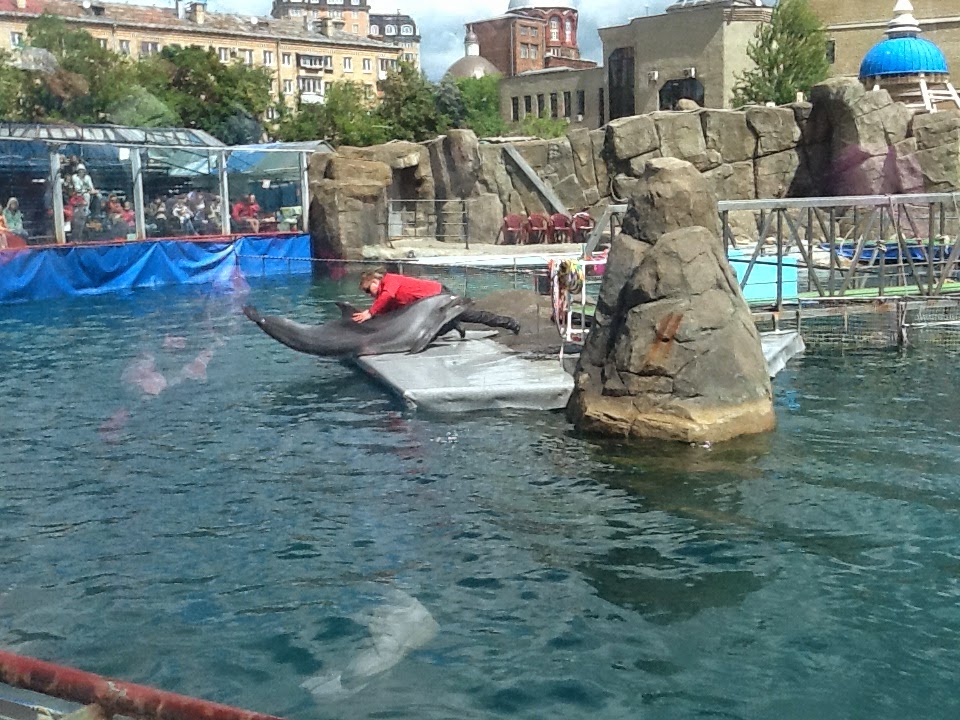 The third act was a small beluga, who tried doing some of the same tricks as the dolphin, and wanted to please the trainer and show off 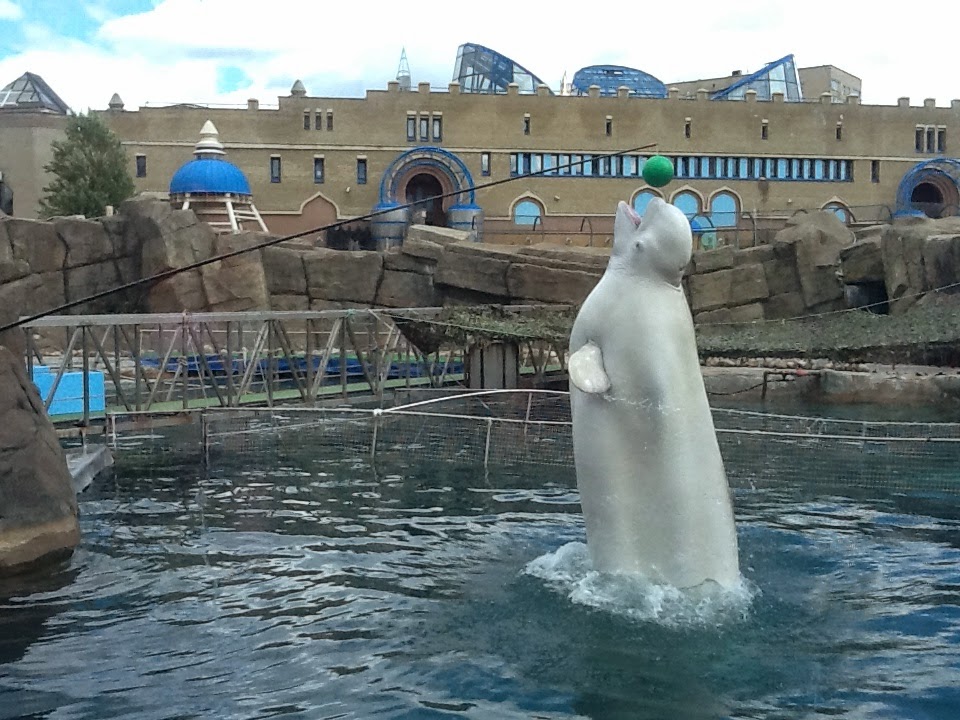 but lets face it, a 1-ton whale is just not as graceful as a dolphin: 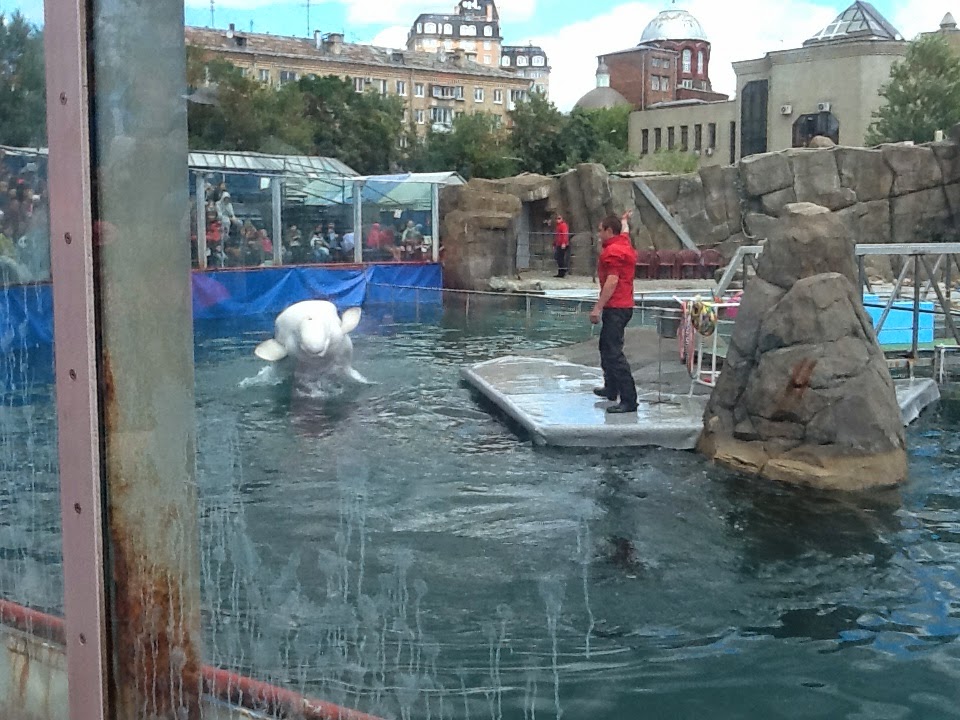 And as anyone with kids knows, it's impossible to photograph what they are watching and photograph them enjoying it at the same time, though that didn't stop Mommy from trying: 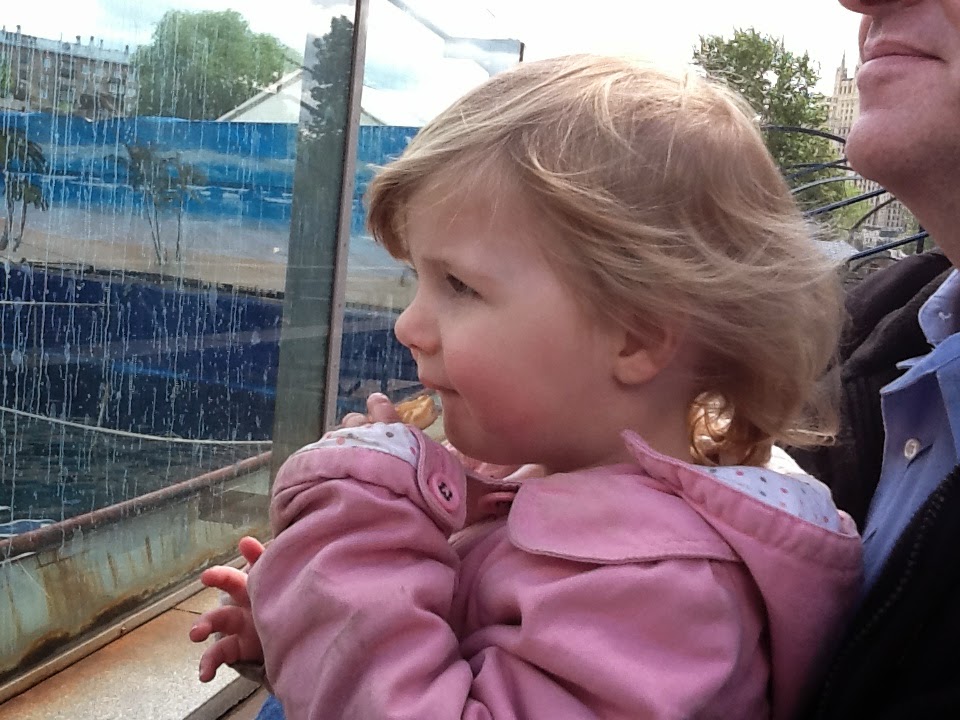 Then, after the show, we saw two of the three elephants outside 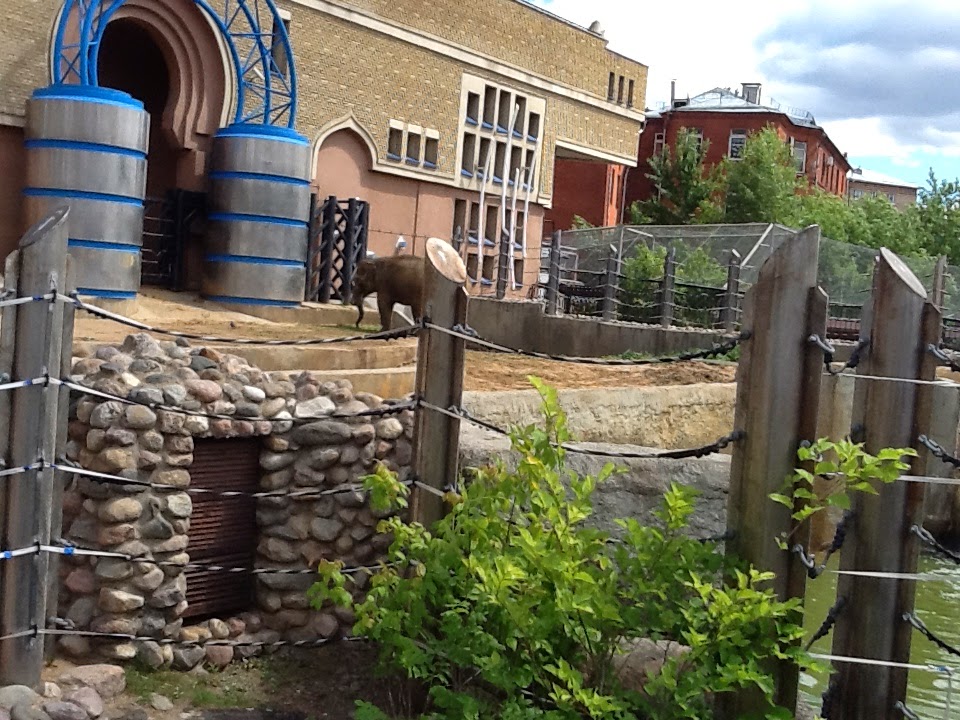 who flatly refused to look at their admiring public: 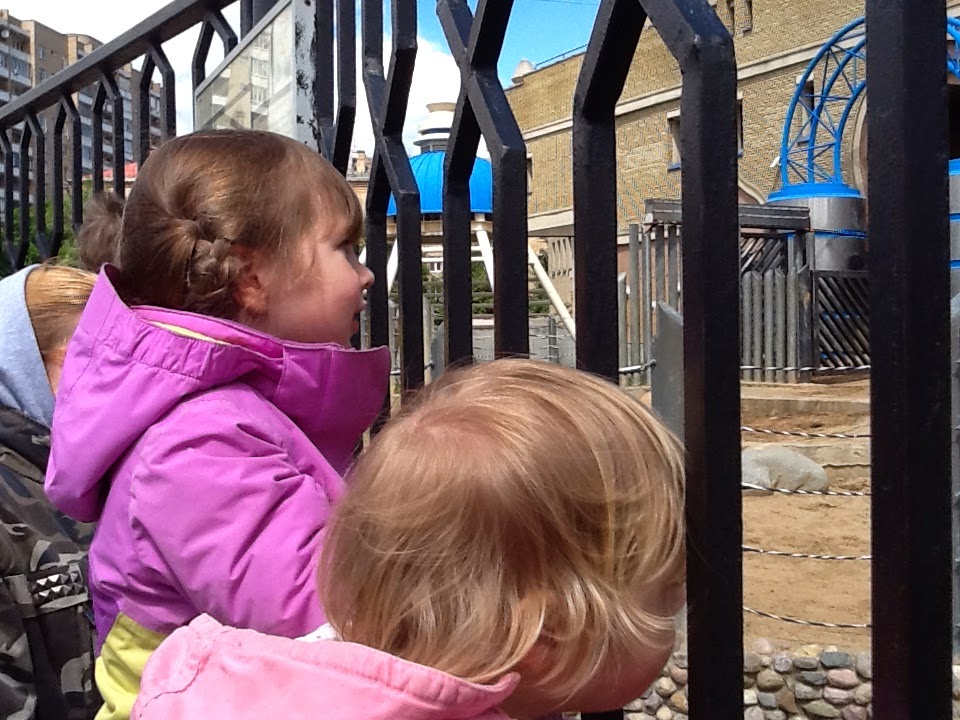 We also saw a zebra and a camel and the nocturnal animals, none of which we had seen on previous trips.

We didn't see the whole zoo, the kids were exhausted from the long march to/from the ATM, so we went home.  But at that price, we can afford to go and just see a few things.  The hardest part of the trip is getting there and back (two metro trains and a tramvai.)  Although on the way home we tried a different route, 1 metro train and 1 longer trip on a tramvai.  With a stroller, the fewer times you change public transport, the better.

Little A's paternal relatives will recognize the similarity.  When her daddy was little, this was his favorite (only) way of eating olives.   The bigger kids won't touch them, but A thought this was great. 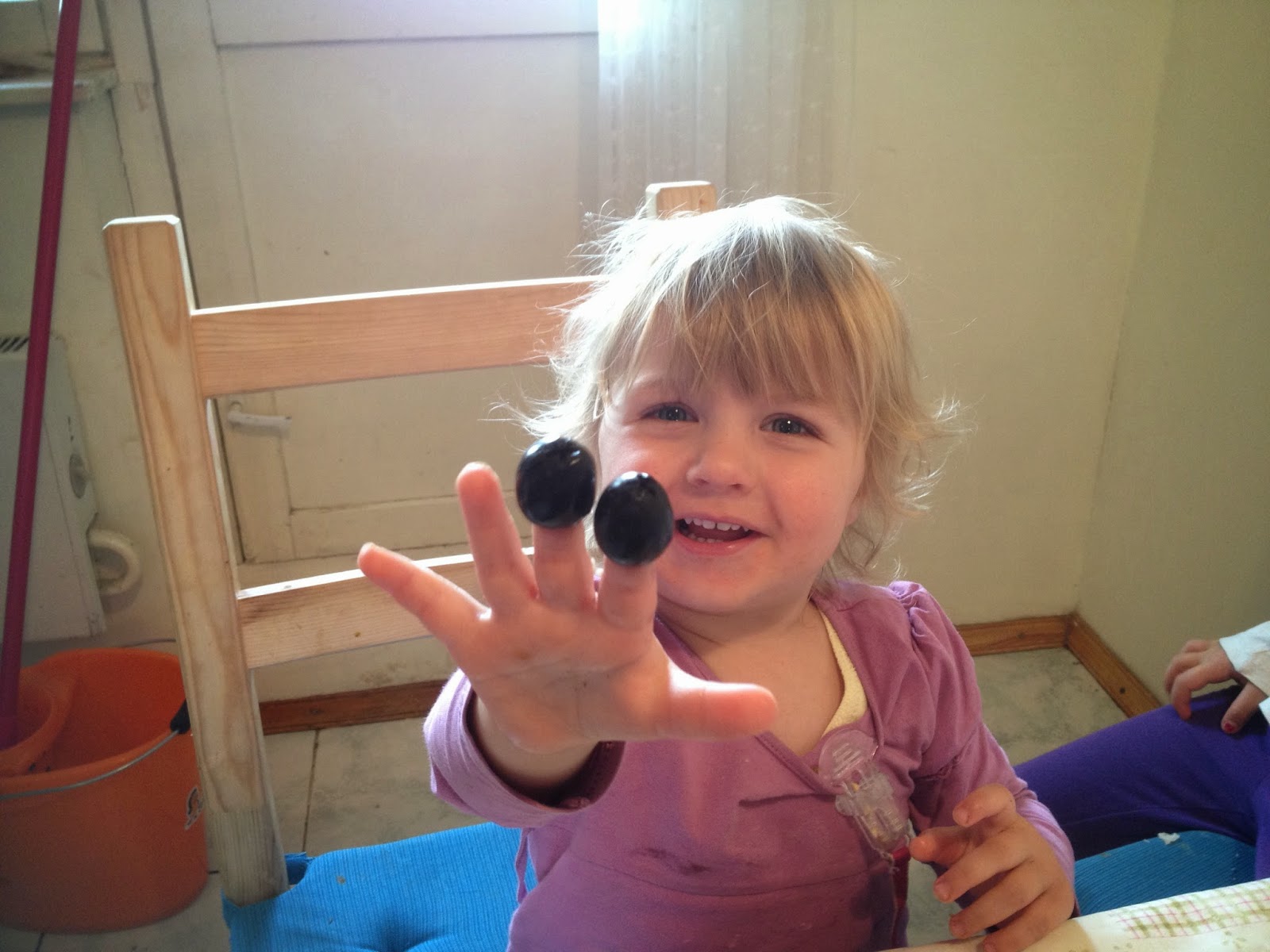 Posted by RussiawithKids at 1:00 PM No comments: 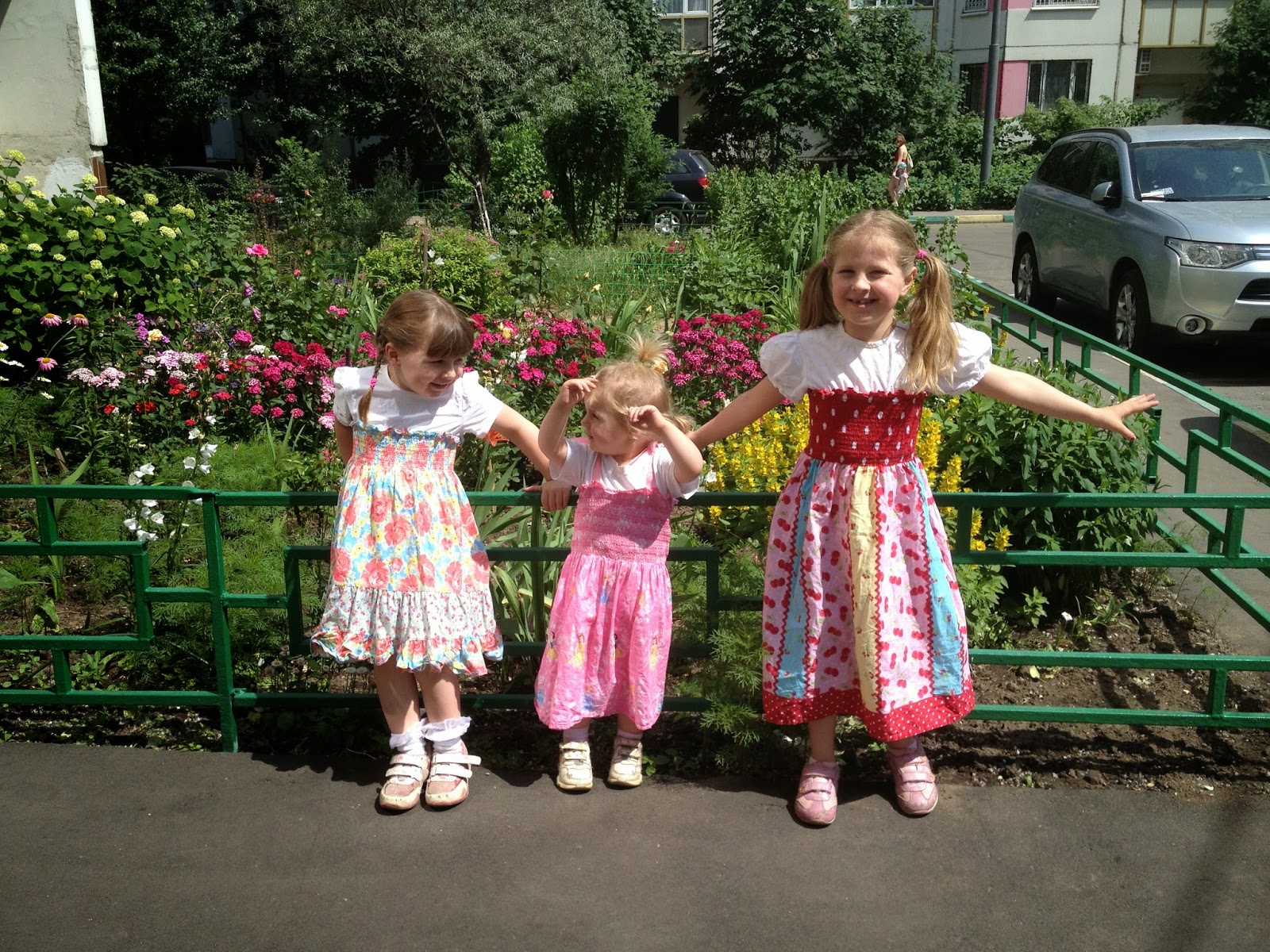 This must have been on our way to church.  This is outside the front door of our apartment building.  Our "concierge" loves flowers and spends a lot of time on her plants in this bit of dirt out front.

S made the three dresses a couple of years ago (bought smocked fabric).  The littlest one is sewn on to a T-shirt, the other two are sewn dress tops with the smocking sewn onto it.

Continuing the trend of eating cake and dashing out the door for birthdays, this was daddy's turn.  He is all dressed up to get on a plane to go to Novosibirsk for another junket.  He had to leave first thing in the morning, so the kids saw him for a total of half an hour on his birthday.

But we couldn't not have something, even though it was breakfast time, so this is a bought pastry as a cake stand-in.  After the song, of course. 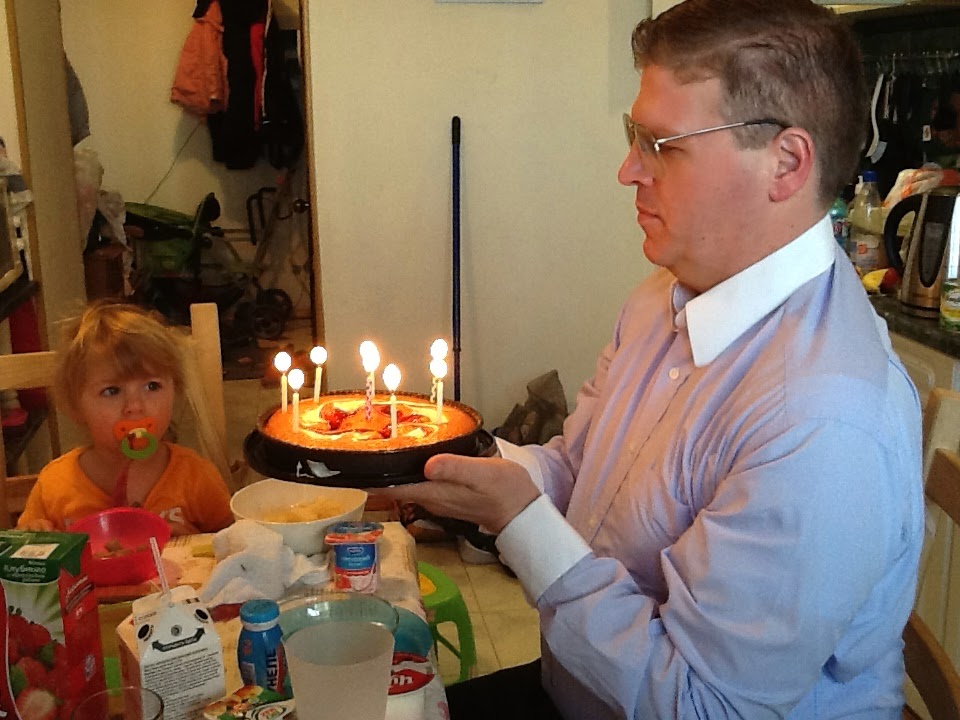 This is after he successfully defeated the self-relighting trick candles: 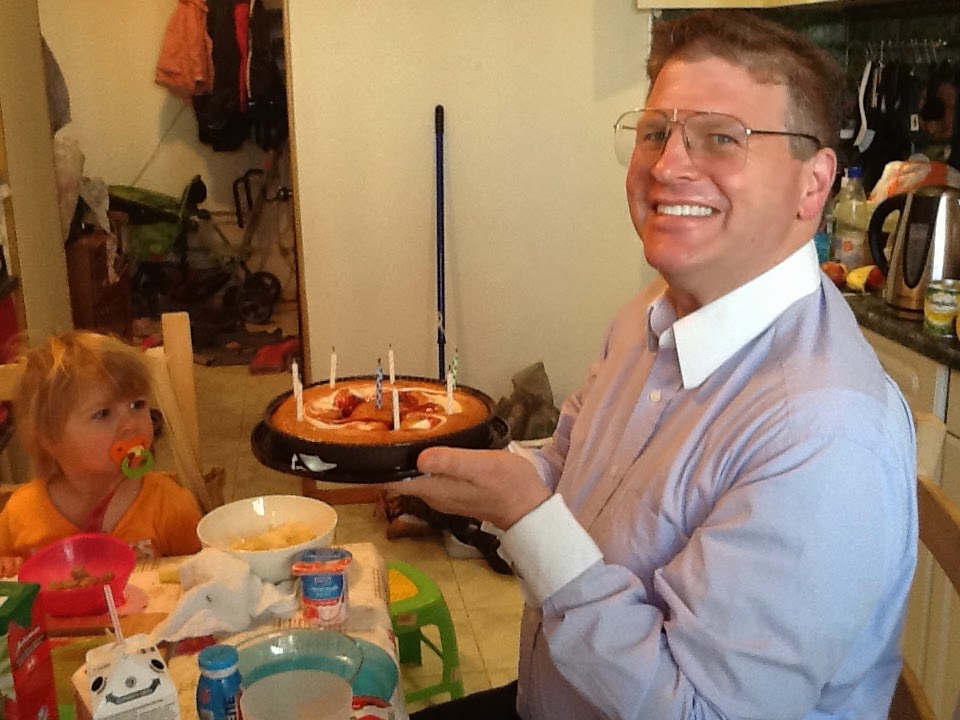 Of course, for kids, any excuse to eat cake for breakfast is a good one.

P.S. Later that same day, our good friends in Novosibirsk Mark and Irina met him, let him stay in a relative's empty apartment, and brought him a real cake and stayed to help him eat it.  So he got a birthday party after all.
Posted by RussiawithKids at 8:00 AM No comments:

In January (the first day of preschool) the front wheel on our Joovy Sit & stand (two person) stroller snapped off when it hit an ice rock.  Given that the red stroller snapped clean in two over the winter holidays, this left us with no stroller.  A kind family at church, who also have three small children, have loaned us their "travel lite" stroller, for which A is too big, but we use anyway.

In April, when S went to the US for a conference (most but not all travel expenses paid by the employer), S stocked up on a lot of things which are much cheaper in the US (kids clothes) and things that are hard/impossible to find.  One of them, a mail order Joovy replacement front wheel.  (which is actually quite easy in the US).

So, since the end of April, we have been using 2 strollers--the little one any time we have to navigate stairs/escalators (that is, every trip on public transportation), and the big one for local trips around our house.

It is not for the ability to carry a second child for which the return of the Joovy is such a welcome occasion.  On the contrary, both older children want a turn to ride on back, and it causes more contention than it is worth (since they are both fully capable of walking.)

It is, in this pedestrian world, for its hauling capacity that the Sit & Stand earns our current praise and gratitude: 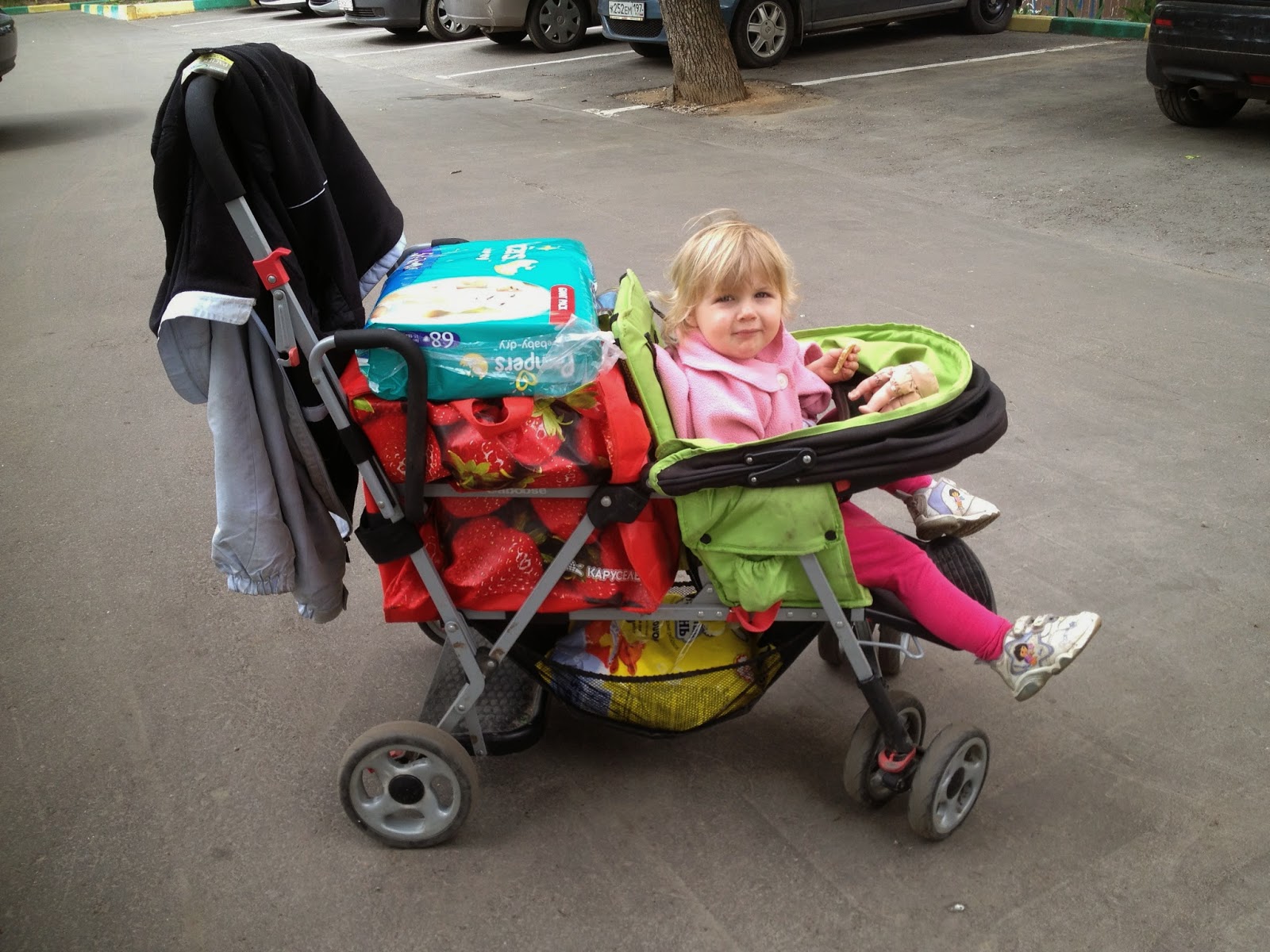 This is home from a nearby supermarket.  Not a cheap store, but well stocked.   Note the 5 kilo bag of laundry detergent in the mesh basket underneath.  The red bag is one of two bags that size, each at least 5 kilos, then the large size diaper packet on top.  So in addition to A, the stroller is also hauling another 40 lbs of stuff we bought.

[No consideration was received for this endorsement :-)]
Posted by RussiawithKids at 11:00 AM No comments: