Fairy Tales, as told by children…

In the Detskii Sad (preschool), it seems like the oldest class (Es group) is always practicing something.  This time, they put on a little show just for the younger classes (Ks group) which was 7 baby goats and the wolf.

This fairy tale is about a mother goat and 7 kids.  She warns them before she leaves not to open the door to anyone but her, and she sings a special song when she comes back.  The wolf mimics the song, gets the baby goats to open the door, and swallows them.  The mother goat comes back, hears what happened (from the one kid who hid in the stove), and goes to find the wolf.  She tricks the wolf into jumping over a fire some hunters left behind, he bursts open, and all the baby goats jump out.

This is a very common fairy tale in Russia, you can find it in collections of fairy tales all over.  But in this version, as acted out by the oldest group in the preschool, for the audience of the other preschool classes (and this doting parent), it has a much kinder ending.

The baby goats (including E) were really cute.  In this version, the wolf (also played by a kid), puts the baby goats in a sack, and when the mommy goat (played by her class teacher) catches the wolf and demands the baby goats back, the wolf says he just wanted to play, so the goats forgive him for kidnapping them, and they all sing a happy song at the end. 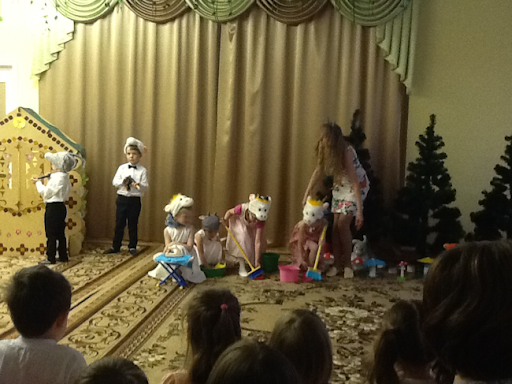 Little goats playing and having a good time (E in pink on left): 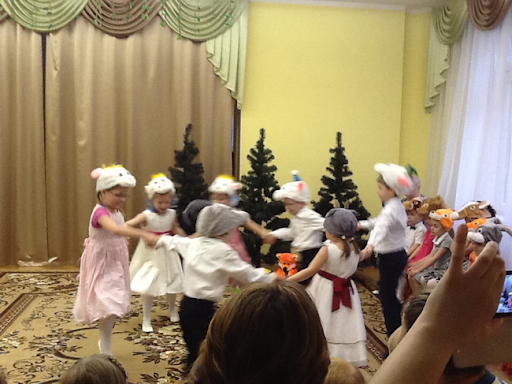 The little house of the goats (only a couple actually fit inside, the others are behind the curtain. 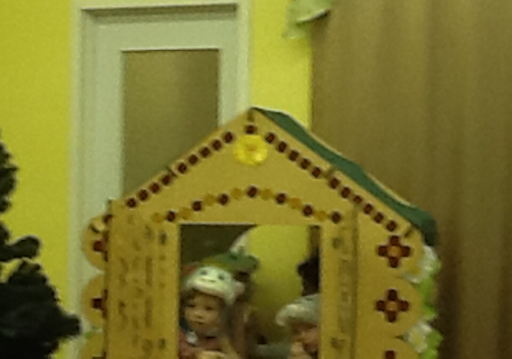 The end, at least of this story 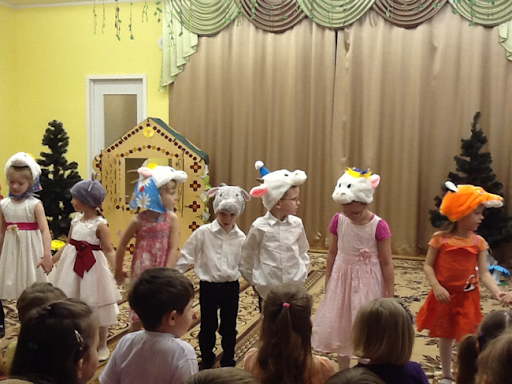 Two admiring audience.  K was sitting with her class in the front row. 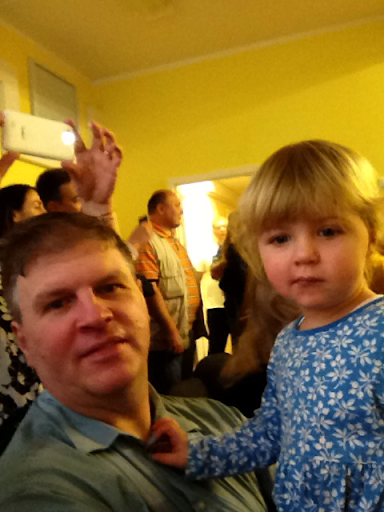 This is in the morning when A comes with us to drop off E and K at preschool.  This is the interior hallway down to K's class: 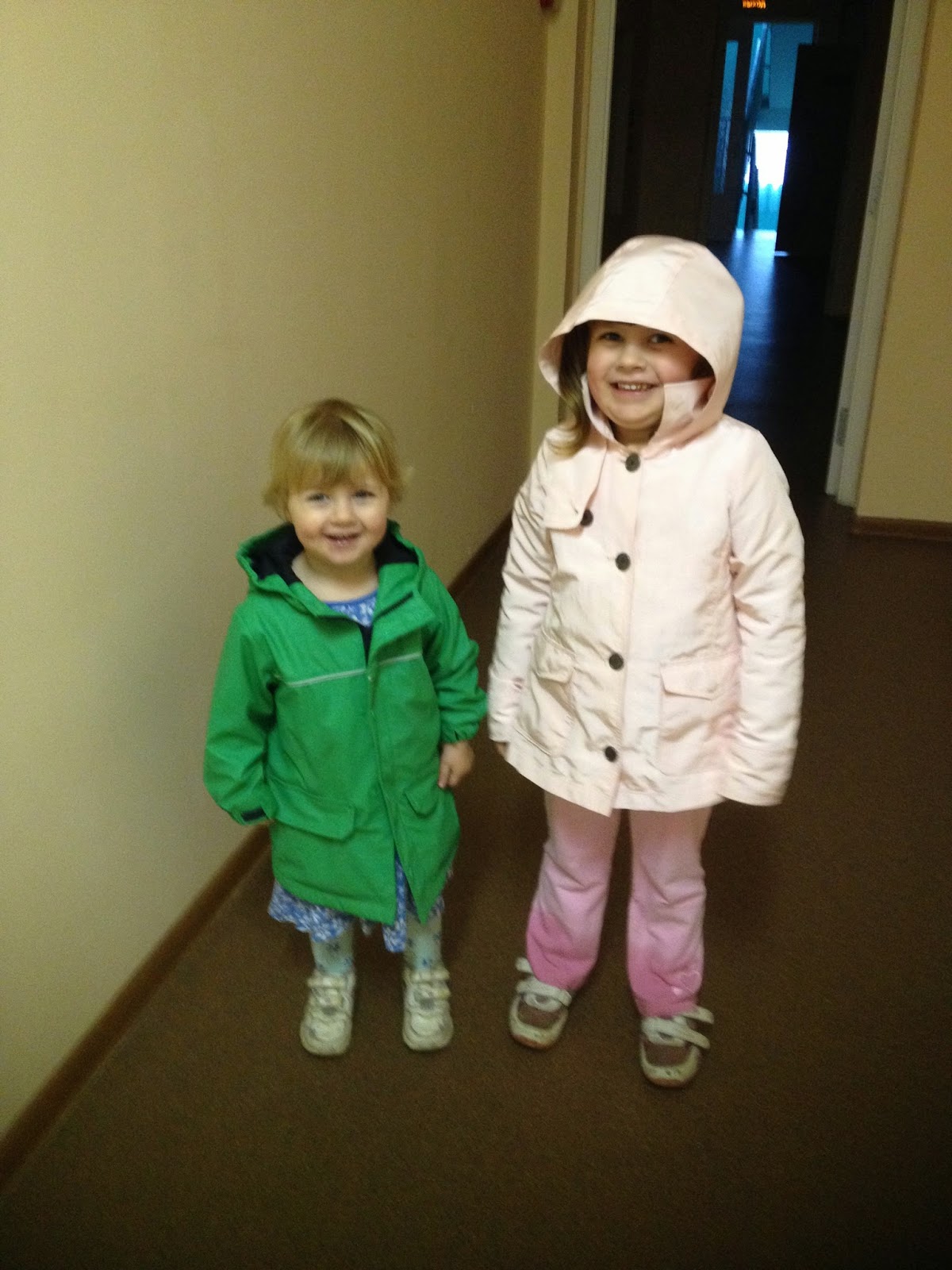 Posted by RussiawithKids at 7:00 AM No comments:

What the girls did on a day off in May: 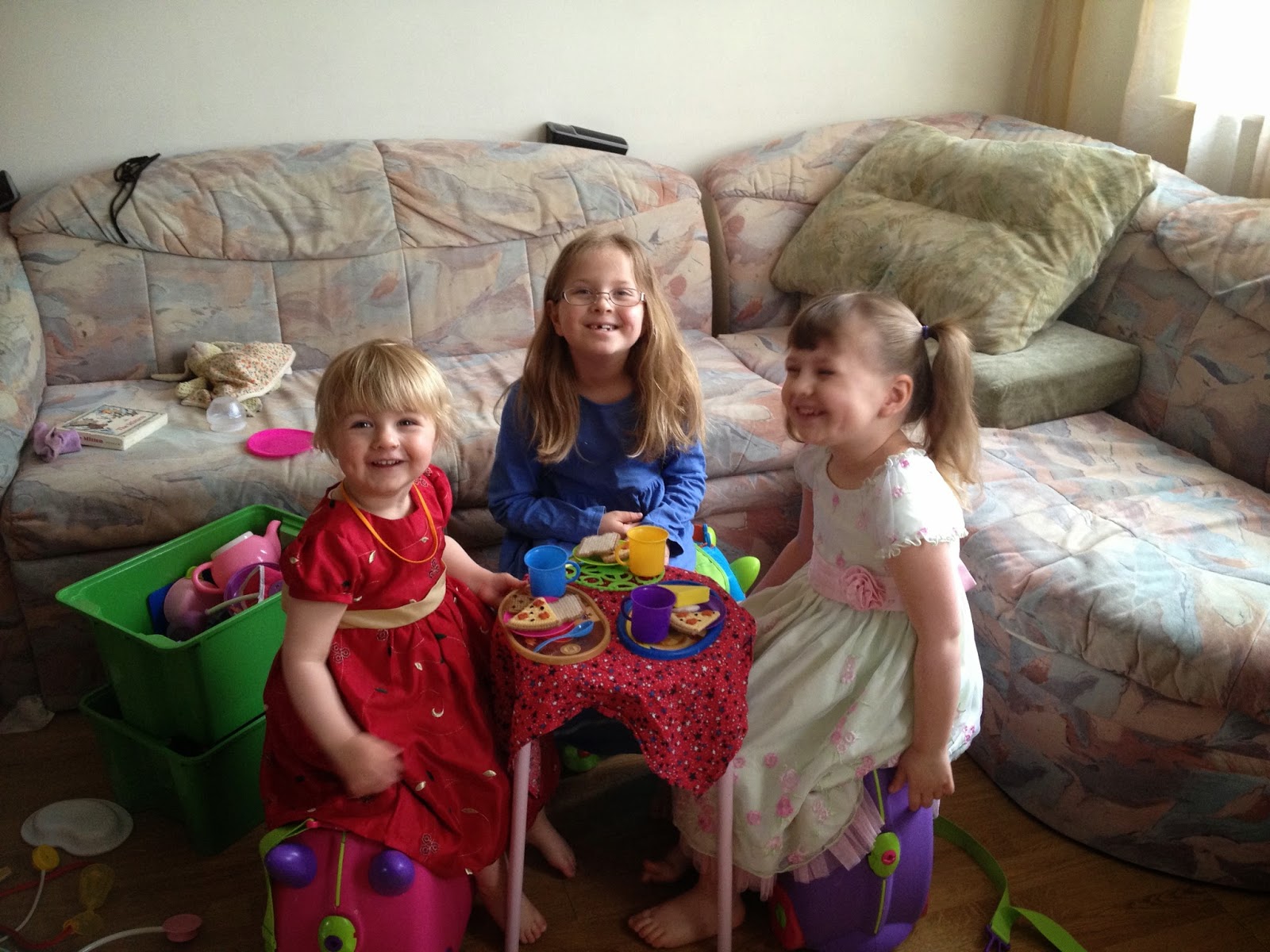 The couch belongs to the apartment (don't blame us), but everything else is ours.  Note the cleverly improvised "chairs."  (Thank you Grandma S!)

Posted by RussiawithKids at 3:00 PM No comments:

Victory Day, May 9th, is when Russians have a huge parade in every city, plus picnics and night fireworks, to celebrate their victory in WWII, or what the Russians call "Great Patriotic War" (or the "Great War of the Fatherland" might be another translation).  For a long time Soviet leaders used this victory as a justification of the Soviet regime, so for over 60 years, Russians have seen the holiday as a very nationalistic, patriotic event.  Even the most liberal, cosmopolitan Russians can wax highly jingoistic and openly xenophobic on May 9th.

So, as obvious Americans, we stayed home.  We watched the parade on TV.  It is strictly a military parade, not communal or social at all.  Military bands, military units, tanks, lots of parade marching.  No high school bands, no floats, no mayors waving from the back seat of cars. 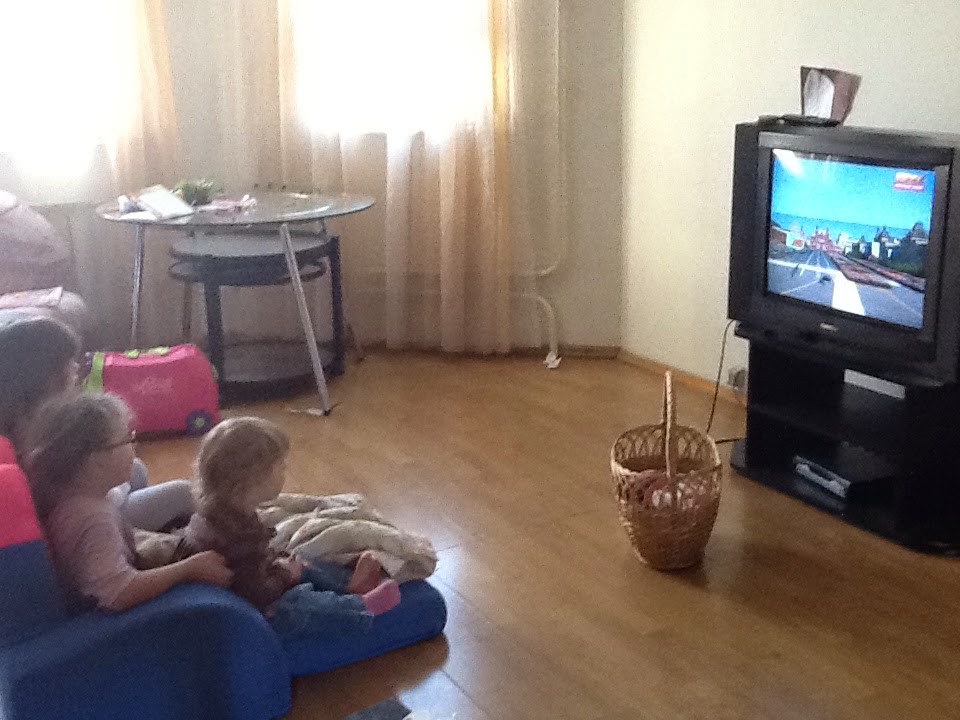 But the best part was the military plane fly over at the end of the parade.  And, the best part of that, is that our apartment building was directly under the flight path from the air base to Red Square (the center of the festivities and origin of the parade).

So, the concierge of our building opened up the trap door to the roof of the building, where no one is usually allowed except maintenance guys, and we stood on the roof and watched the planes fly over. 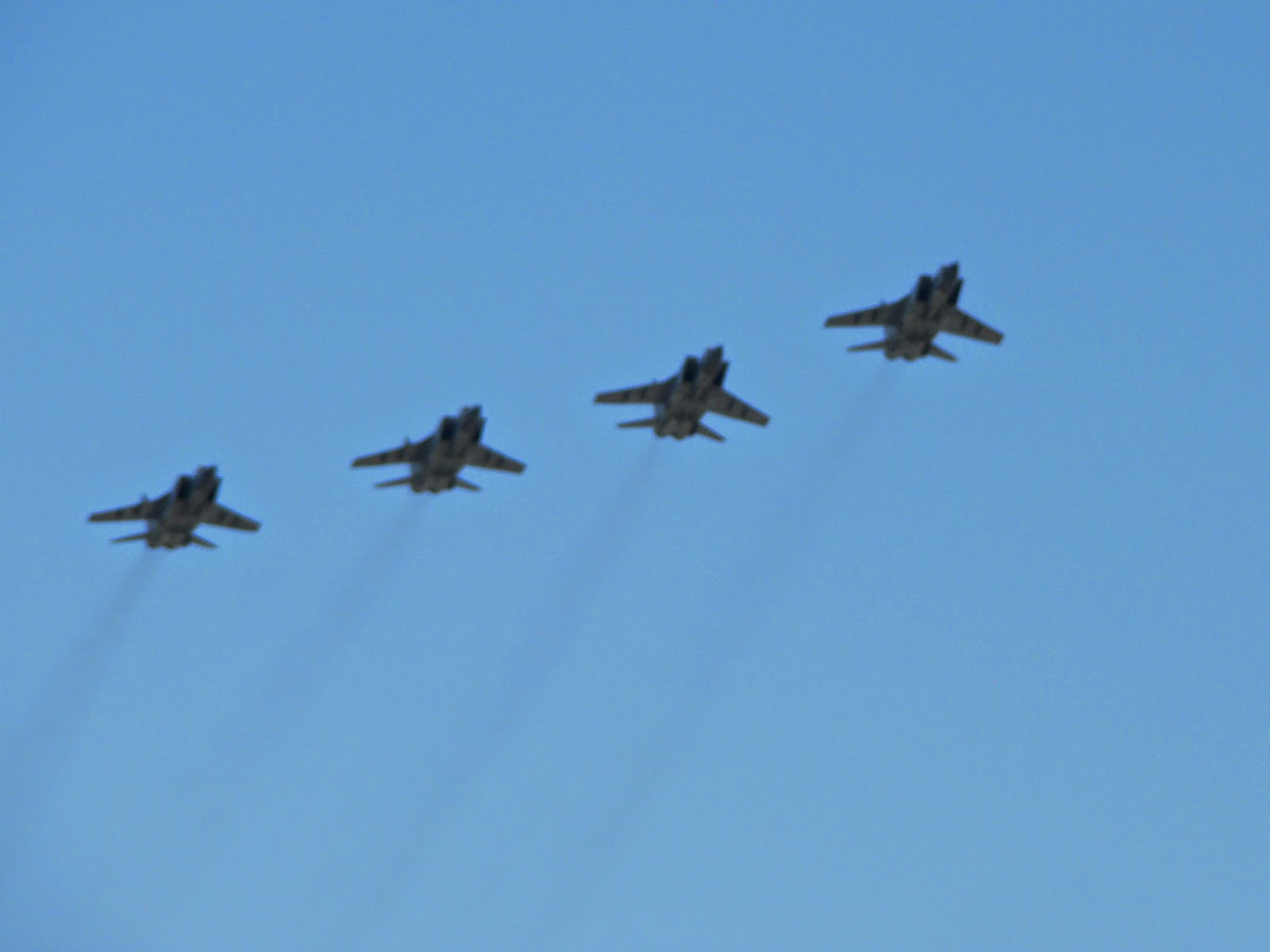 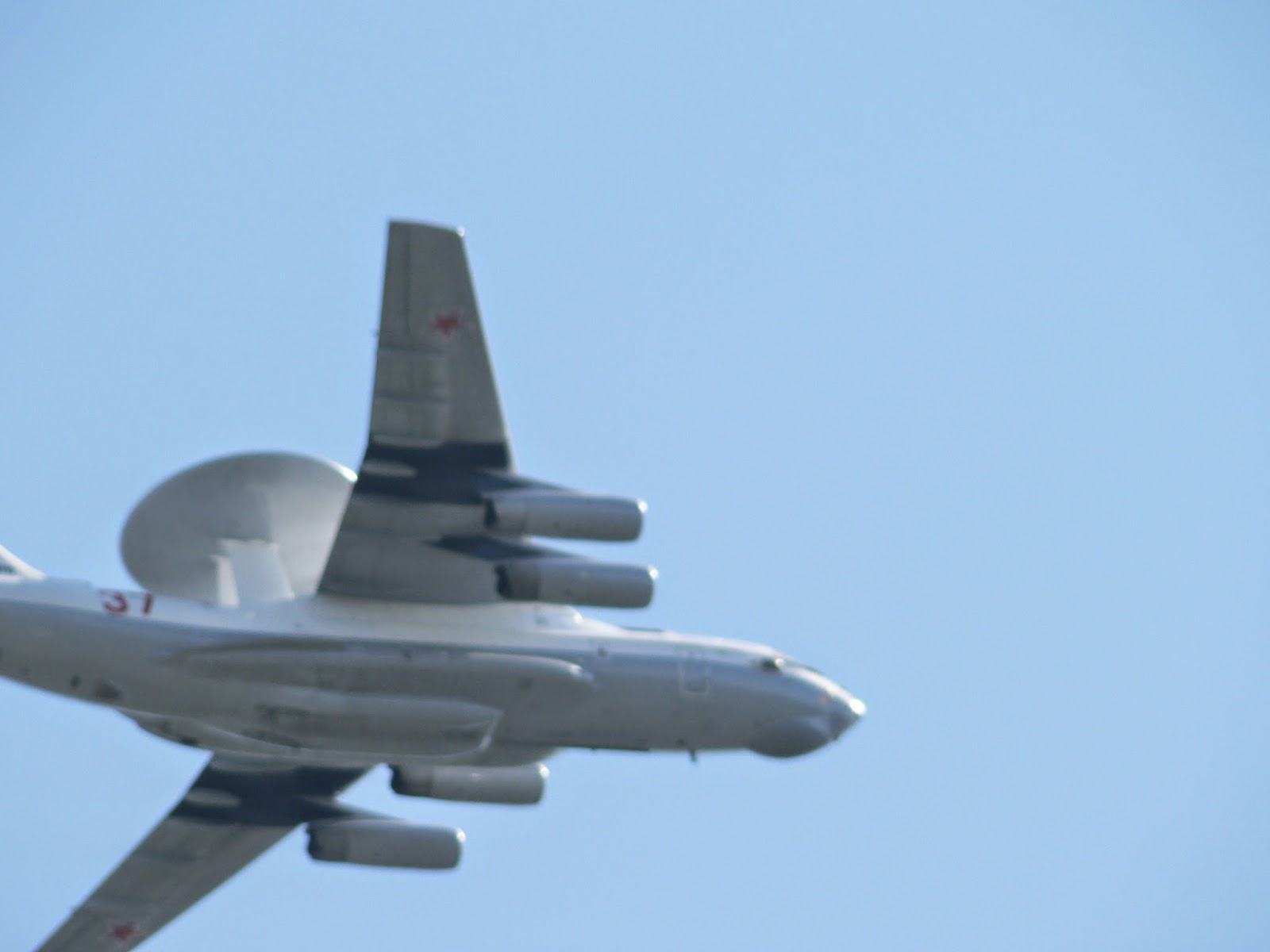 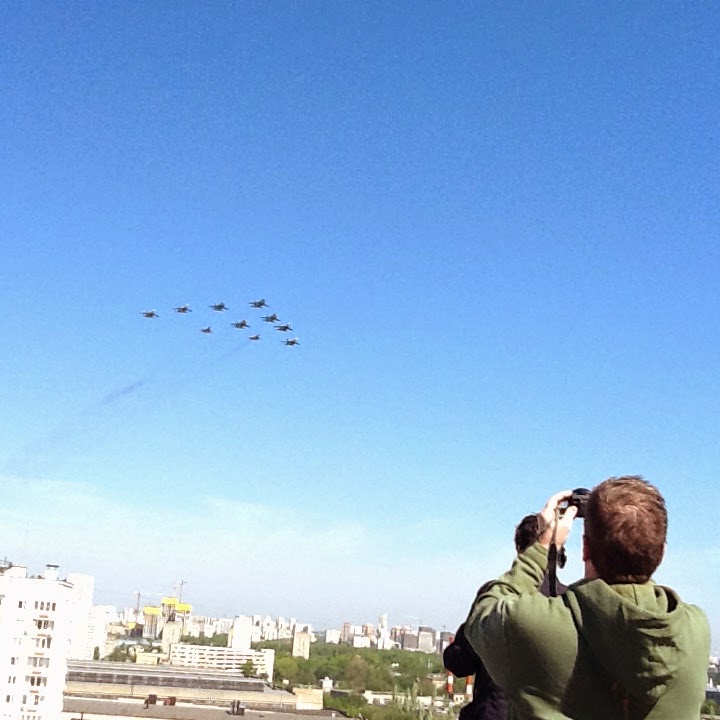 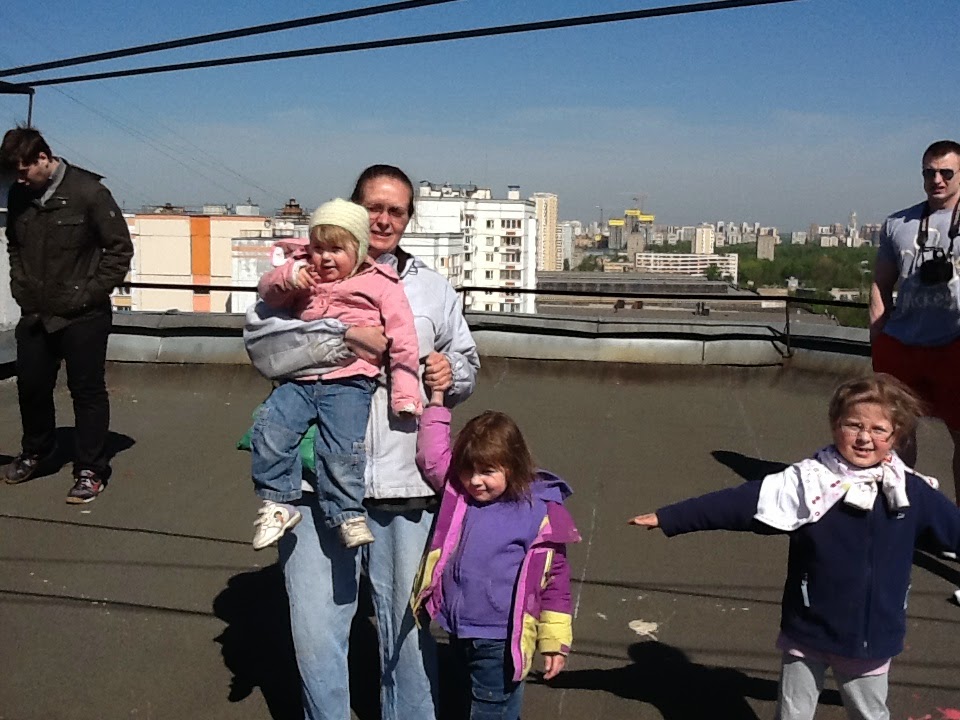 Posted by RussiawithKids at 11:00 AM No comments: