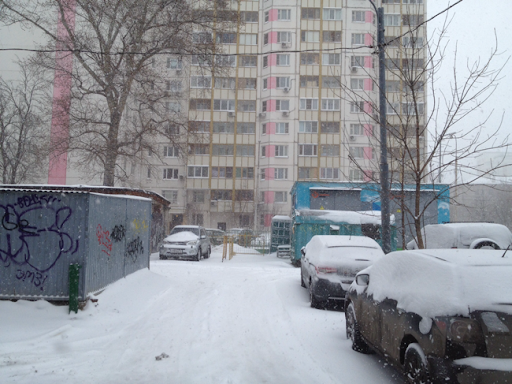 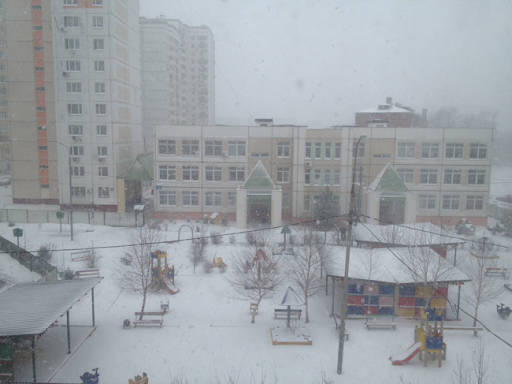 Posted by RussiawithKids at 10:29 PM 2 comments:

This holiday isn't celebrated here, unless you go to an Irish pub, but we certainly had some leprechauns visit us: 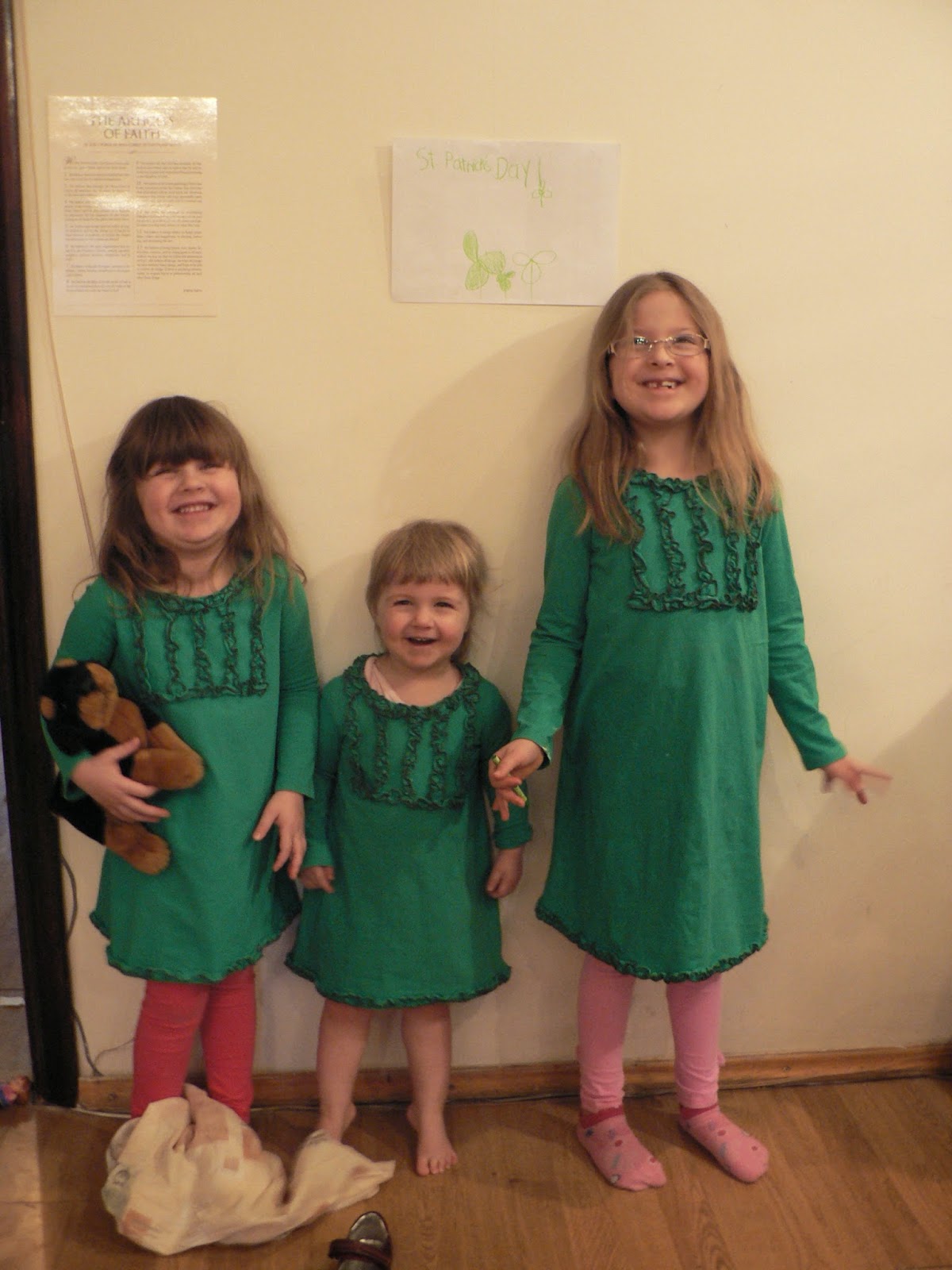 Through the Looking Glass

When I first visited Russia in 1994, I attempted to explain what it was like when I returned to the US.  It wasn't easy.  What I told people then was that Russia was like Alice visiting Through the Looking Glass, where everything you assume becomes not true, and everything you think is too absurd for words actually exists.

It's a little less strange now.  Twenty years later, with shopping malls and McDonalds, Moscow at least appears to be like any other big city you might know in the West (or at least Europe) crowded, unfriendly, historic, bustling, commercial, but recognizably urban and global.

Until you have to actually encounter Russian bureaucracy.  I've discovered it comes in two kinds: Difficult and Impossible.  At my university, for example, there is a lot of paperwork--at least as much as the most arcane US government office.  But at my university, they want us to succeed, and so as long as you dot all the i's and cross all the t's and fill out arbitrary papers by even more arbitrary deadlines, they allow you to do what you intended to.  That's Difficult, where the procedure must be followed, but there is also an end goal.

Then there is the other category, the Impossible, where the goal _is_ to follow the procedure, even when that is logically impossible.

I went to the department of education which covers our district of Moscow, to request permission to enroll our third child in detskii sad now, since the other two are already in.  She's a bit young, but children her age are enrolled at this detskii sad (I've seen them), so we thought we would ask.

The first office, responsible for the electronic record keeping, rehearsed some reasons why she shouldn't be considered (you aren't permanent residents, she is too young, etc) and then finally said, we cannot help you because her application is for the 2015-2016 school year.  We can change it to the 2016-2017 school year for you, but not to 2014-2015.  Can't be done.

Well, go talk to the other office, the department of education.  Have them issue an order.

(Wasn't I already talking to them? Evidently not.  Records isn't the same as the people who make the decisions).

So, out the door, in the other door (of the same building), the official district office of the department of education.  Two guards at the door (serious guards with uniforms and badges, not just a door keeper) refused us admission to the building because visiting hours were only until 11:30 (it was only just then 12 noon).

Can we come back tomorrow?

Visiting hours are posted over there.

Seriously?  Of the 36 work hours in a week, only 6 are for the public to visit?

Do you know how many people live in this district?  (I don't but it must be over a million, because the city is over 14 million and we only have 10 districts. Ok, so a lot of them don't have kids, but still…)

What do they do the other 30 hours?  Drink tea?  Even in Russia that seems a bit excessive.

So a colleague from work called to that office the following day, and found out that the person at least would talk on the phone (though not available for office visit).

[Which, by the way, is illegal, but mentioning that to a bureaucrat is useless, sometimes harmful.]

[Seriously? You sit in the same building? You can't even enter their computer system? What? Or write an order that they change our registration? Evidently not…]

"Your child is too young.  All detskii sad take children starting at 3 years old."

But there is a group for younger children…

"That can't be, that's a lie, we don't have any younger groups in our district.  Who told you that?  Where?"

At this point my colleague wisely shut up, so as not to 'blow the whistle' on the director of our detskii sad (who told me to my face that they not only have a younger group but have a space she could join).  My colleague realized that she was up against Bureaucracy of the Impossible variant, and gave up.

See, here the population exists to give staff workers a salary, a justification for yet another government job.  Real people with real questions only get in the way.

This is why Russians need "our man" in an office, to find ways around this. Which is what foreigners don't have.
Posted by RussiawithKids at 11:00 AM 1 comment:

International Women's Day (March 8th) is a big deal here in Russia.  All men (and boys) are obligated to be nice to all women (and girls).  It's like mother's day in the US, complete with high volume flower sales, special printed cards, etc, without the pressure of being a mother, since all girls and women get compliments and something nice.

At work, it is required to have some kind of celebration, maybe taking tea or giving all the women colleagues flowers.  Oh, and March 8th is a national holiday, so the celebration is the last work day before the day off.  If March 8th is a Saturday or Sunday, the day off is a Friday or Monday, sometimes they also have an extra day off.

As a foreigner, S didn't have anyone at work to give her a party or gifts, but she organized the foreign staff to give a collective gift to the international coordinator.  It's a collection of teas, wrapped as a bouquet of flowers would be gifted.  Very clever. 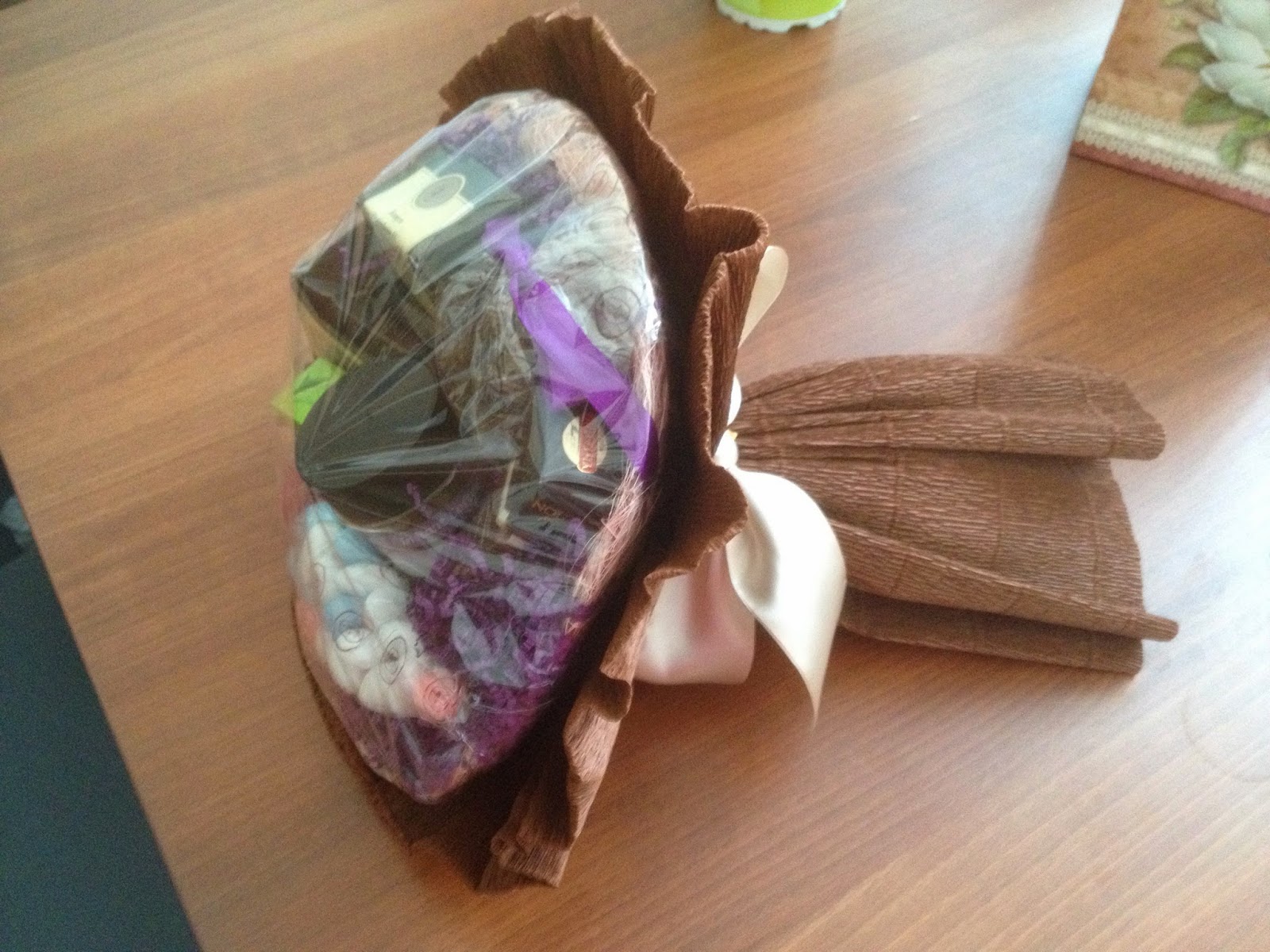 At church, they held a party at the church building on Saturday.  It was in honor of both March 8th and springtime.  Involved showing a movie clip from an old Soviet rom-com ("Office Romance"), and some games for grownups.  This is a charades version of "telephone" (where team members has to copy the actions of the first one and then the last has to tell what the action was intended). Very funny. 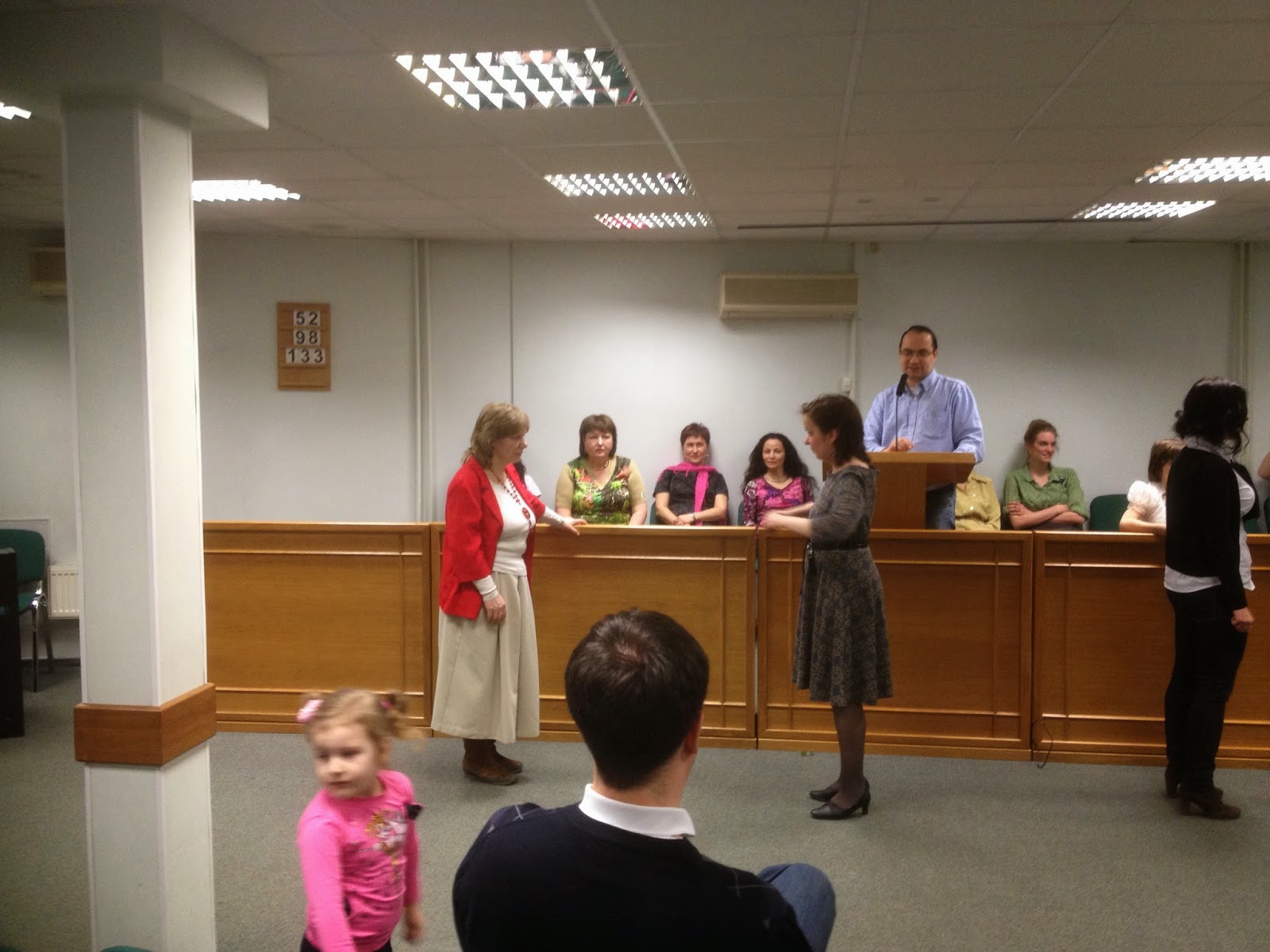 Wasn't really for little kids, but there aren't a lot of little kids at church, and it was very well received by all the women at church. There were of course refreshments, but they were sliced meat on bread, cucumbers, tomatoes and juice. A shocking lack of chocolate, and very little sugar of any kind. 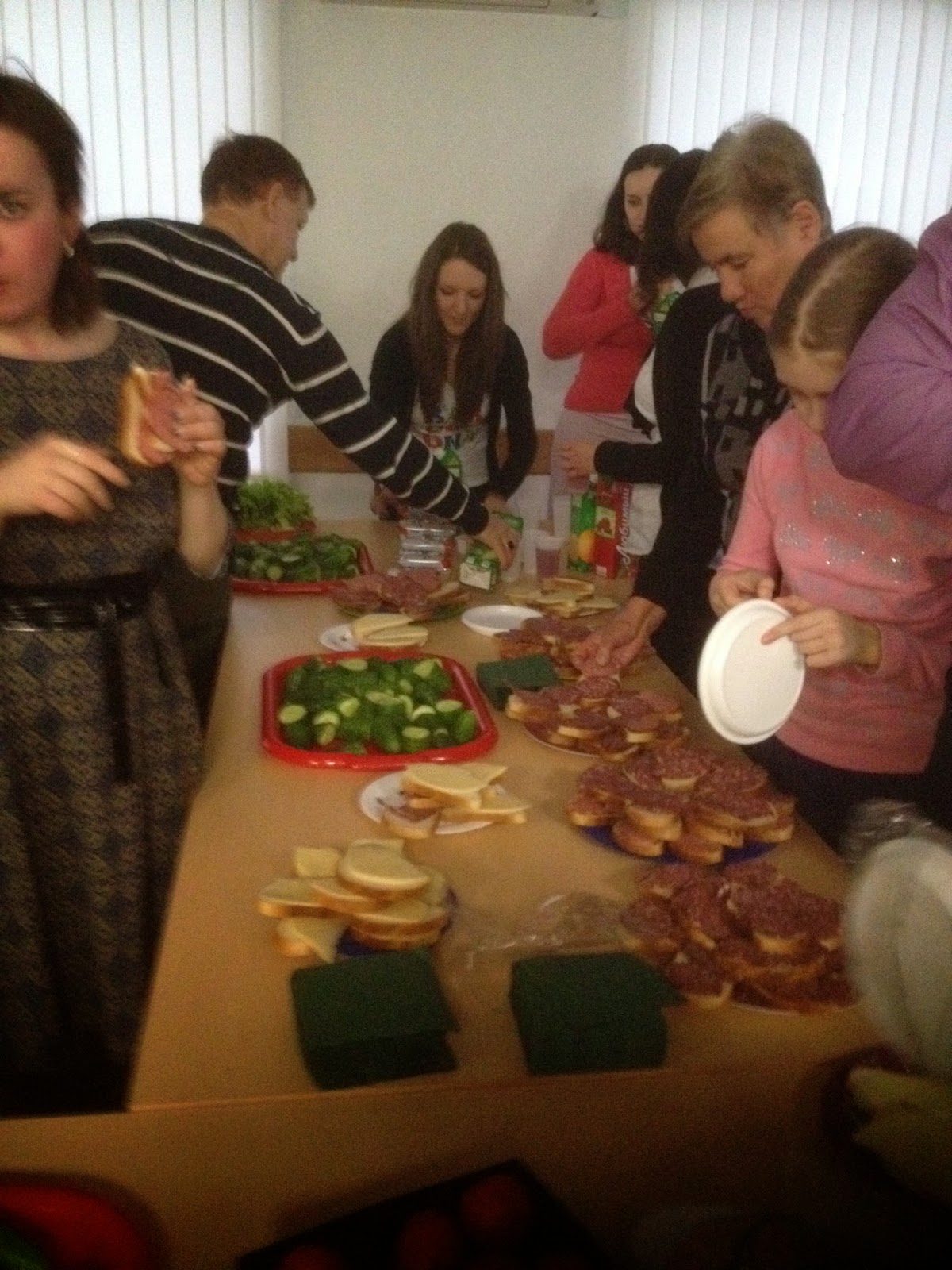 Then on Sunday the men came into Relief Society and sang the women a song.  And there were treats for the women and girls (12-18), and probably something for the small kids too.  For the women there were real chocolate bars and some homemade cookies.

At the detskii sad (preschool), the children gave gifts to their teachers (or the parents did).  I imagine some groups took up a collection for larger gifts or gift cards, but we just gave a gift bag with tea in a fancy tin and some chocolate.  By the time each class has two teachers, and the music teacher, and the director is a woman, the gifts add up.

This is K's class (she is in purple in the second row).  But after this song, K got scared and came and sat with us.  But she knew the words to the songs as well as the other three year olds. 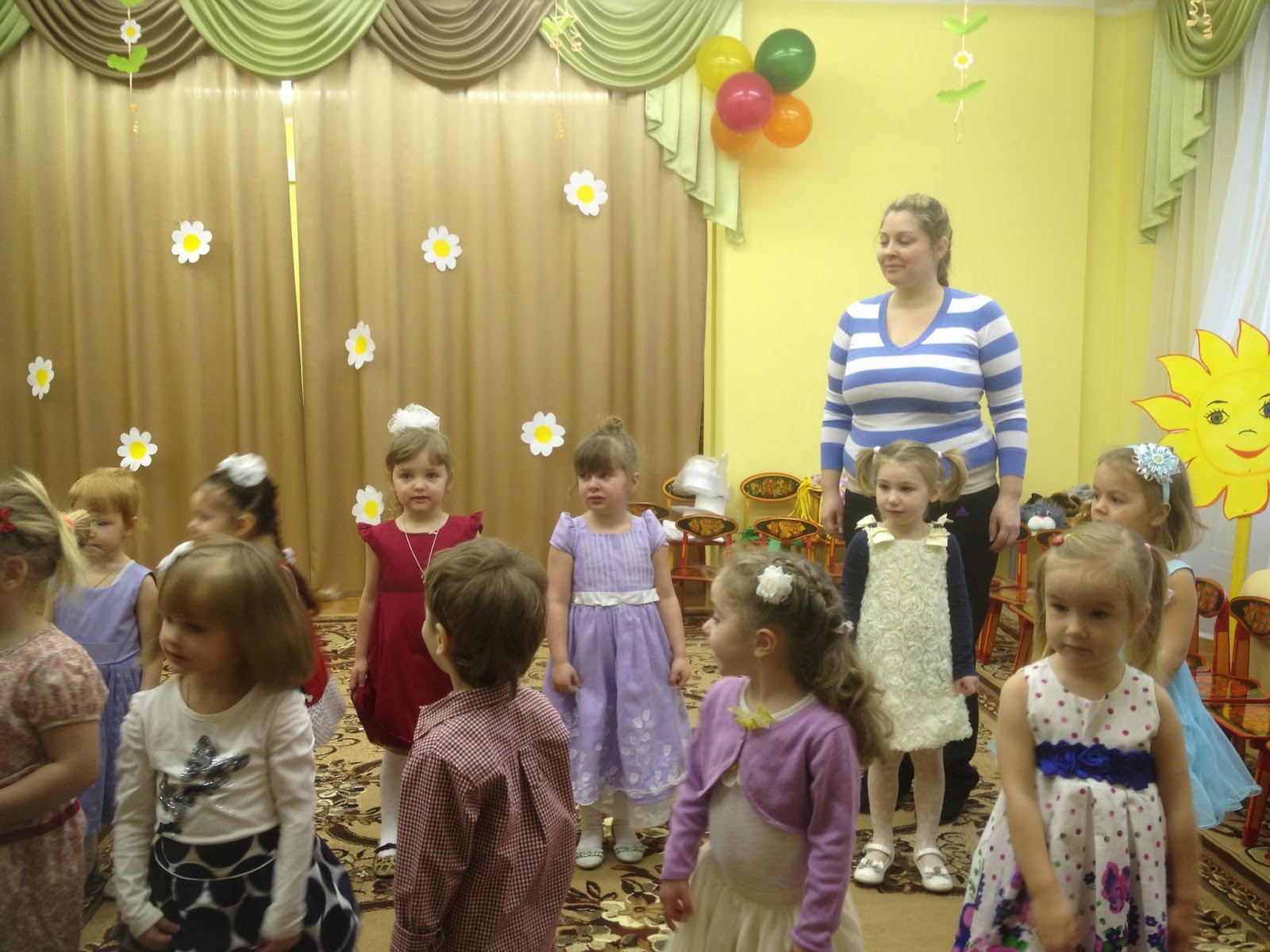 This is E's class and E's teacher dressed up like "springtime": 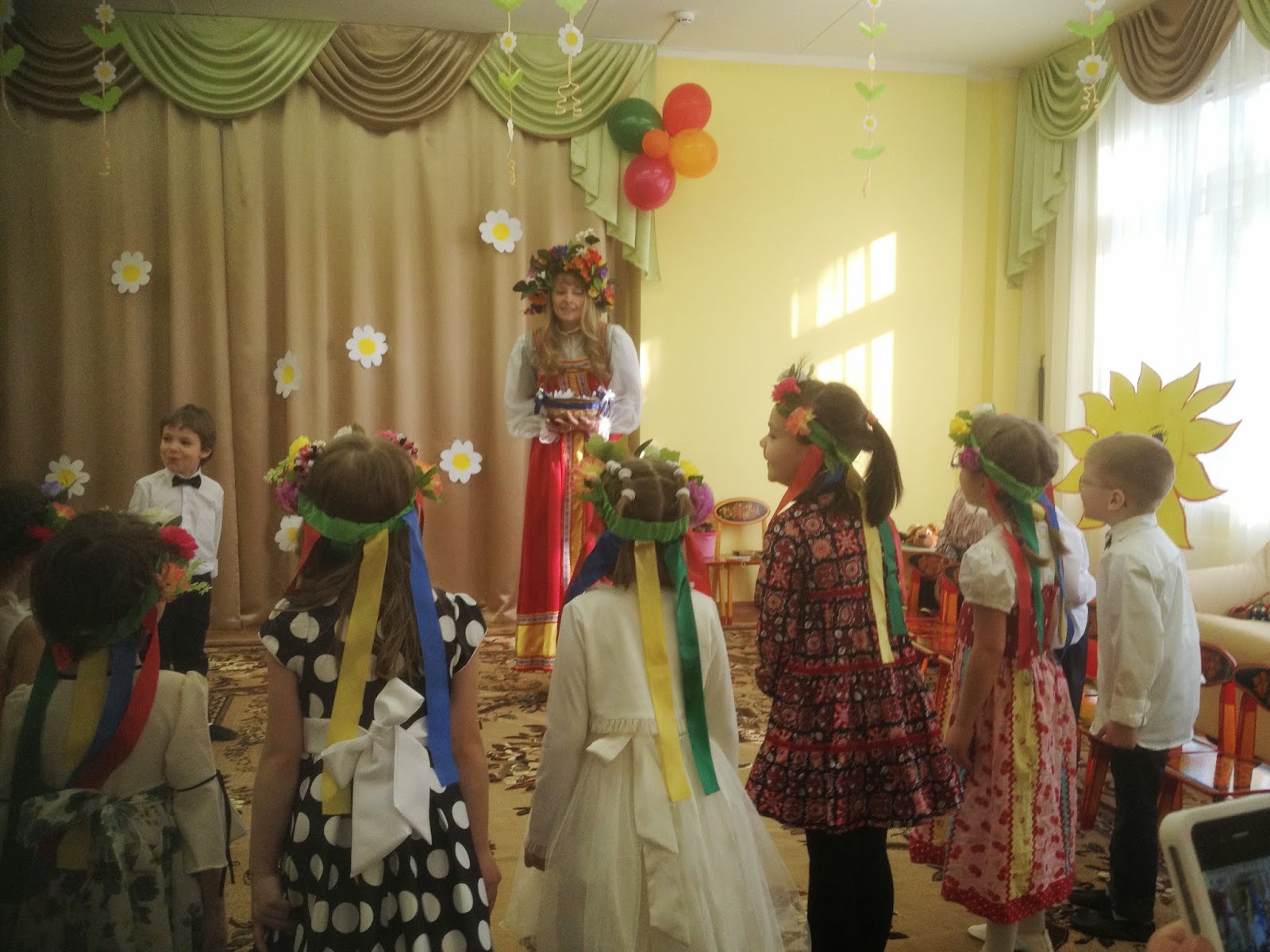 The children performed songs and dances for spring-time and about their mothers and grandmothers.  E sang along right with the other kids. 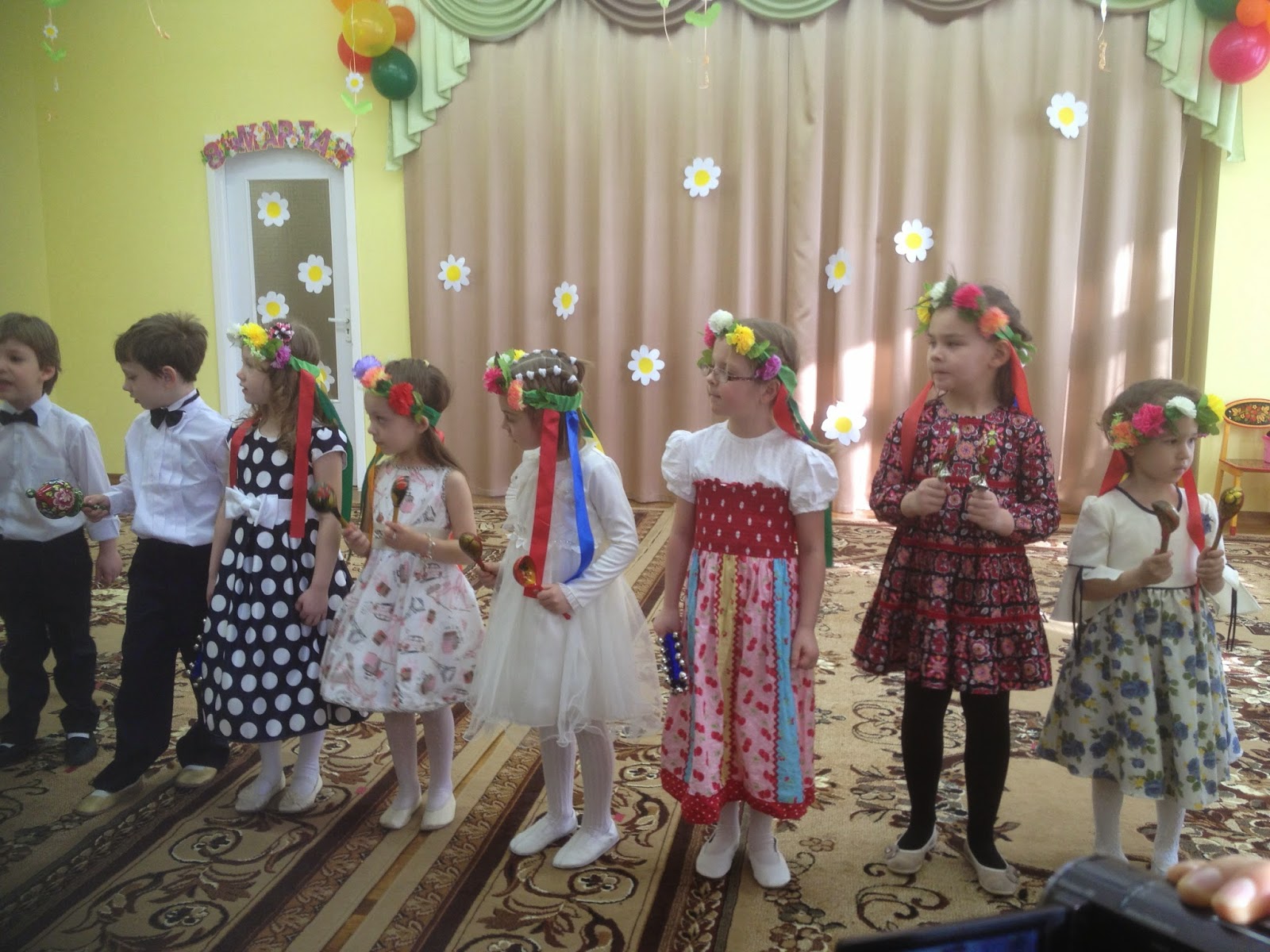 At the end of each show, they invited the mothers or grandmother to come "dance" with their child.  Here is Mommy with K. 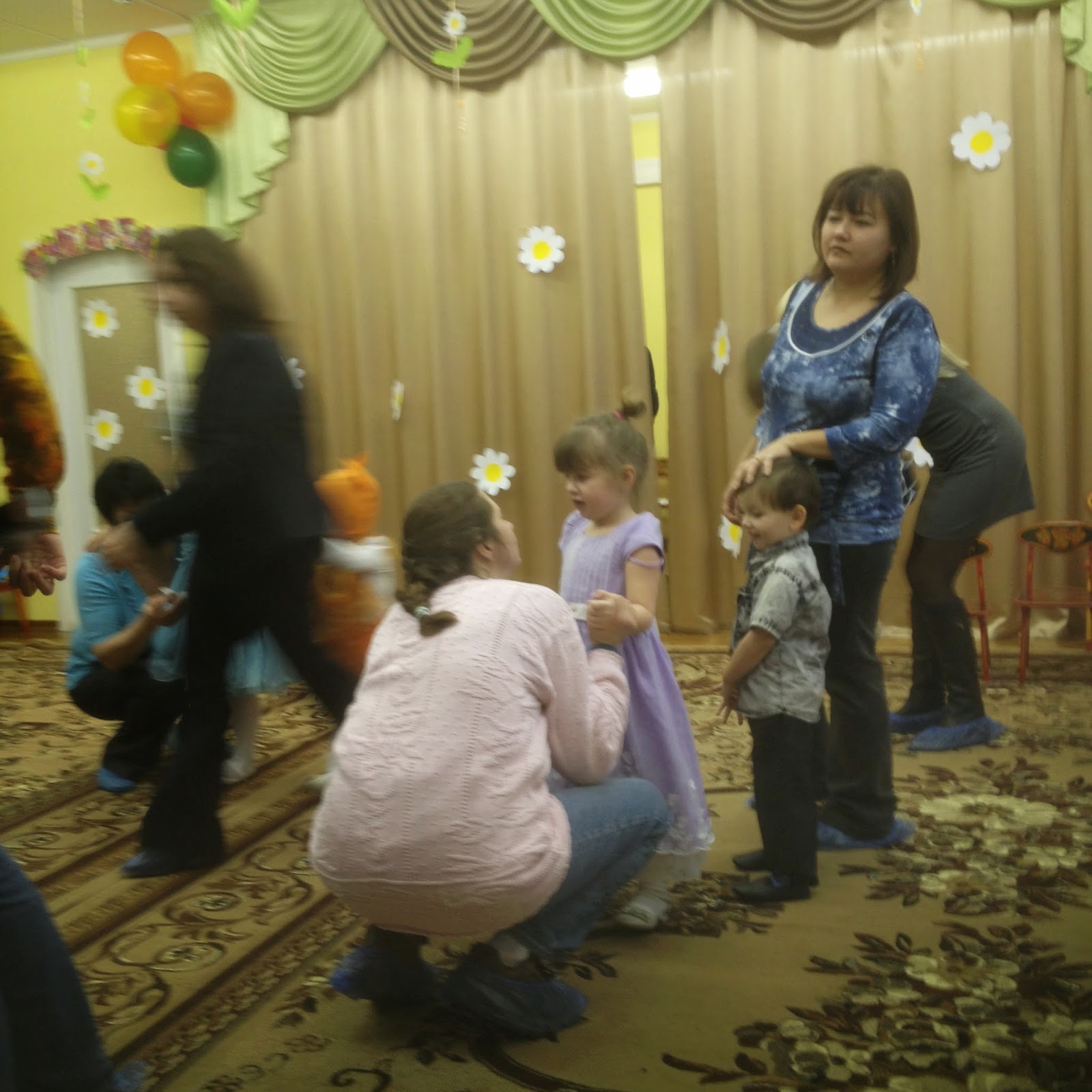 And here is Mommy with E. 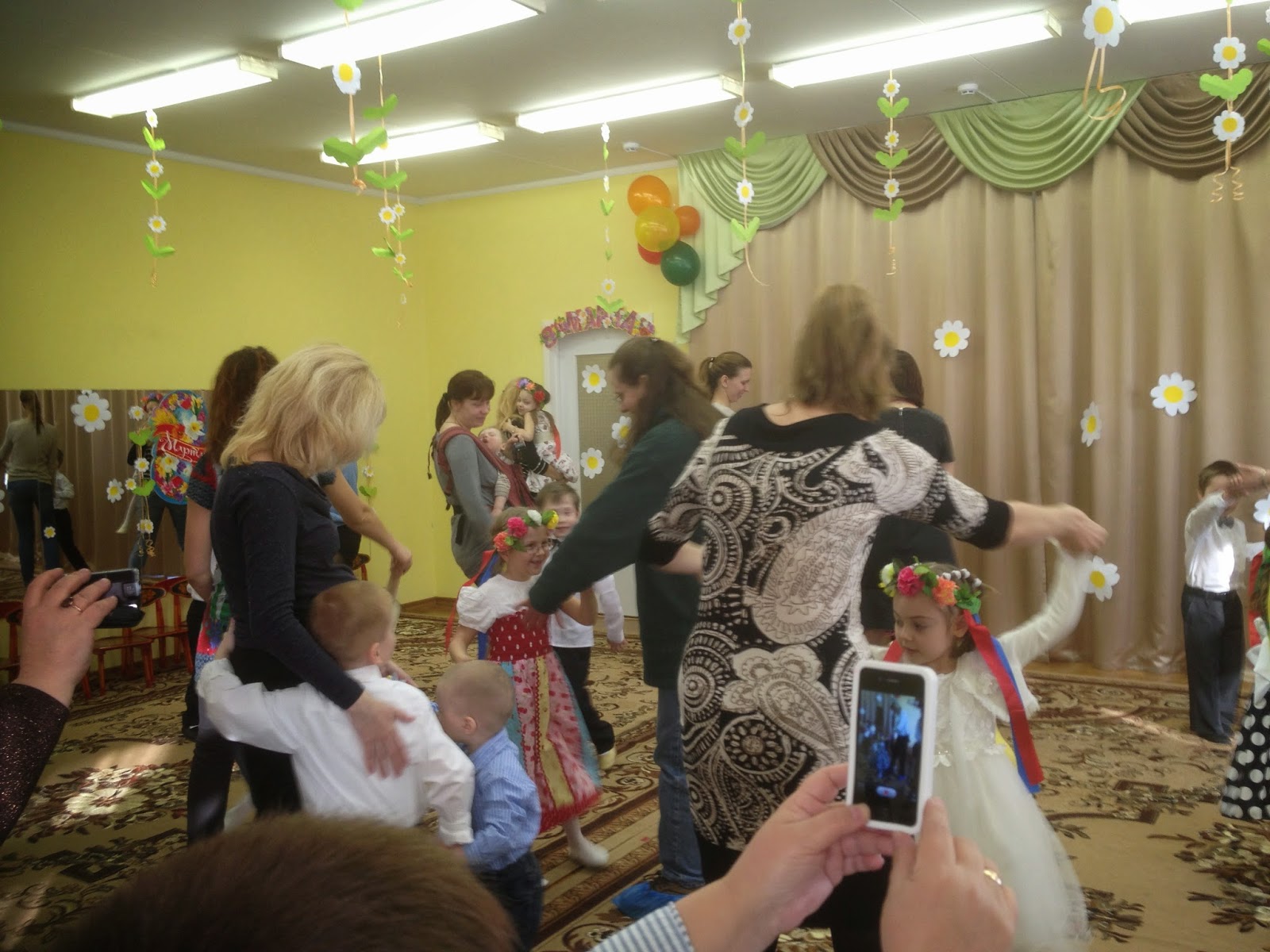 And to sum up March 8th holiday, what better than this photo: 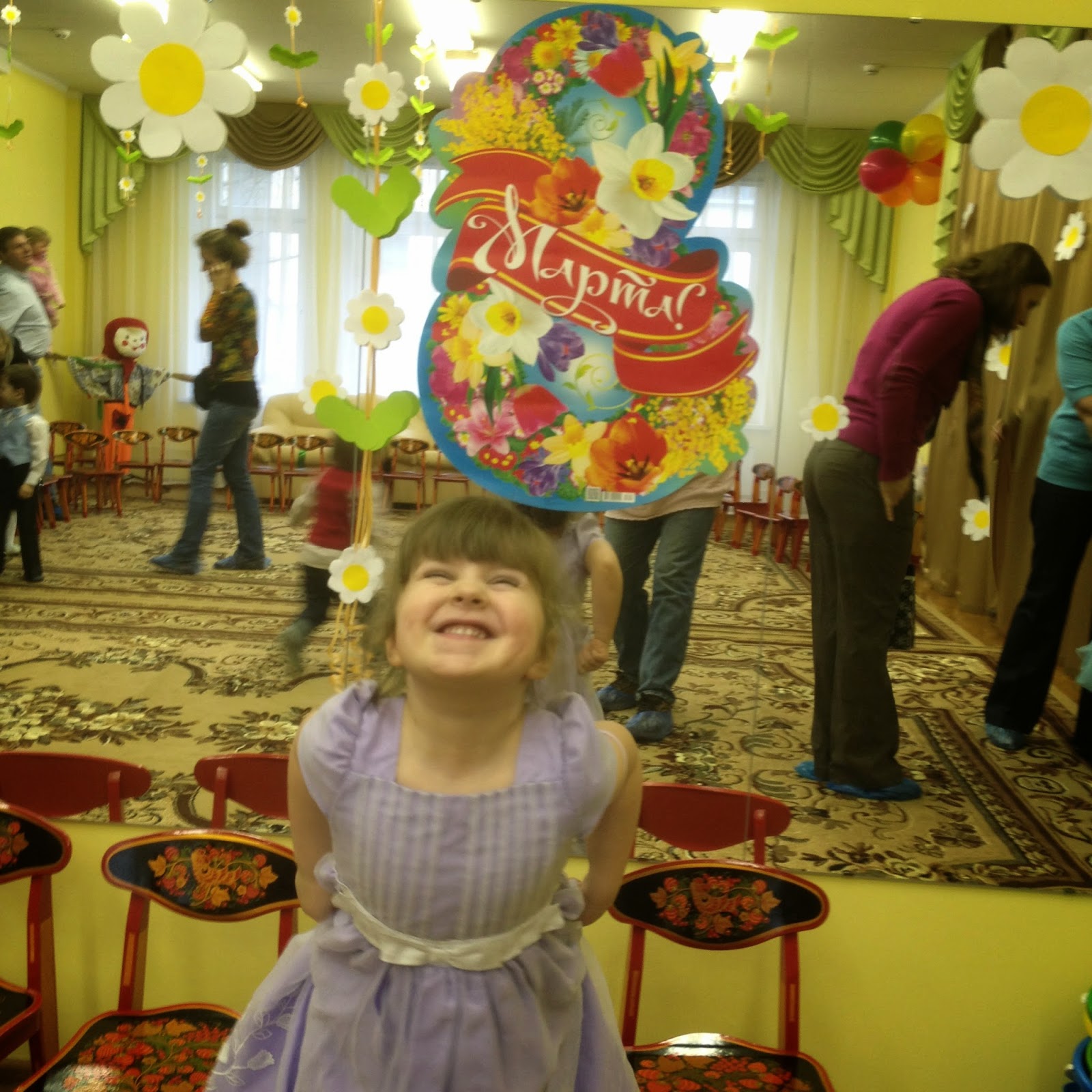 Posted by RussiawithKids at 2:00 PM No comments: