When the big kids go to preschool, the "little one" gets left behind, and plays with Mom or Dad (whoever's turn it is to stay home). Or plays by herself, or gets into trouble, or just looks cute. 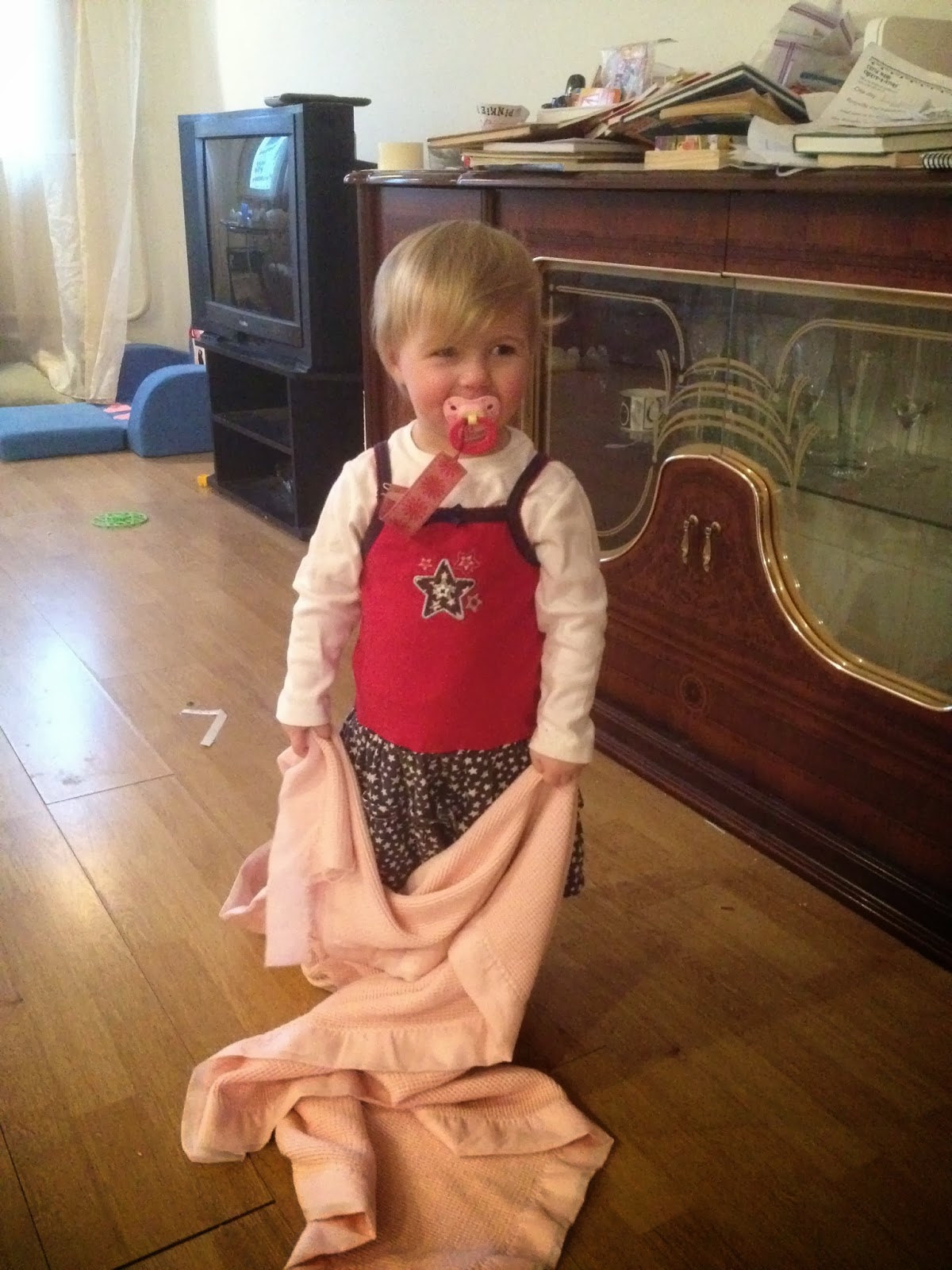 Except for the pacifier, she really looks a lot older than she actually is.  …
Posted by RussiawithKids at 9:00 AM 2 comments:

Two weeks after the actual birthday, we finally had the long scheduled party…  First E was sick, then there was an out of the ordinary stake conference (where the first stake president was released and a new one was called--a first for Moscow).

So, E had our good American friends over, with their 4 children under ten, then another American friend bringing the daughter who had invited E to her party in the fall so of course we invited her.  One of our Russian family friends was supposed to come but their kids got sick.  And a friend E made in her after school class, Aurora, also came with her grandmother.

Here is the birthday lunch, spaghetti and meatballs, by request from the "birthday girl" -- "imenitsa" in Russian. 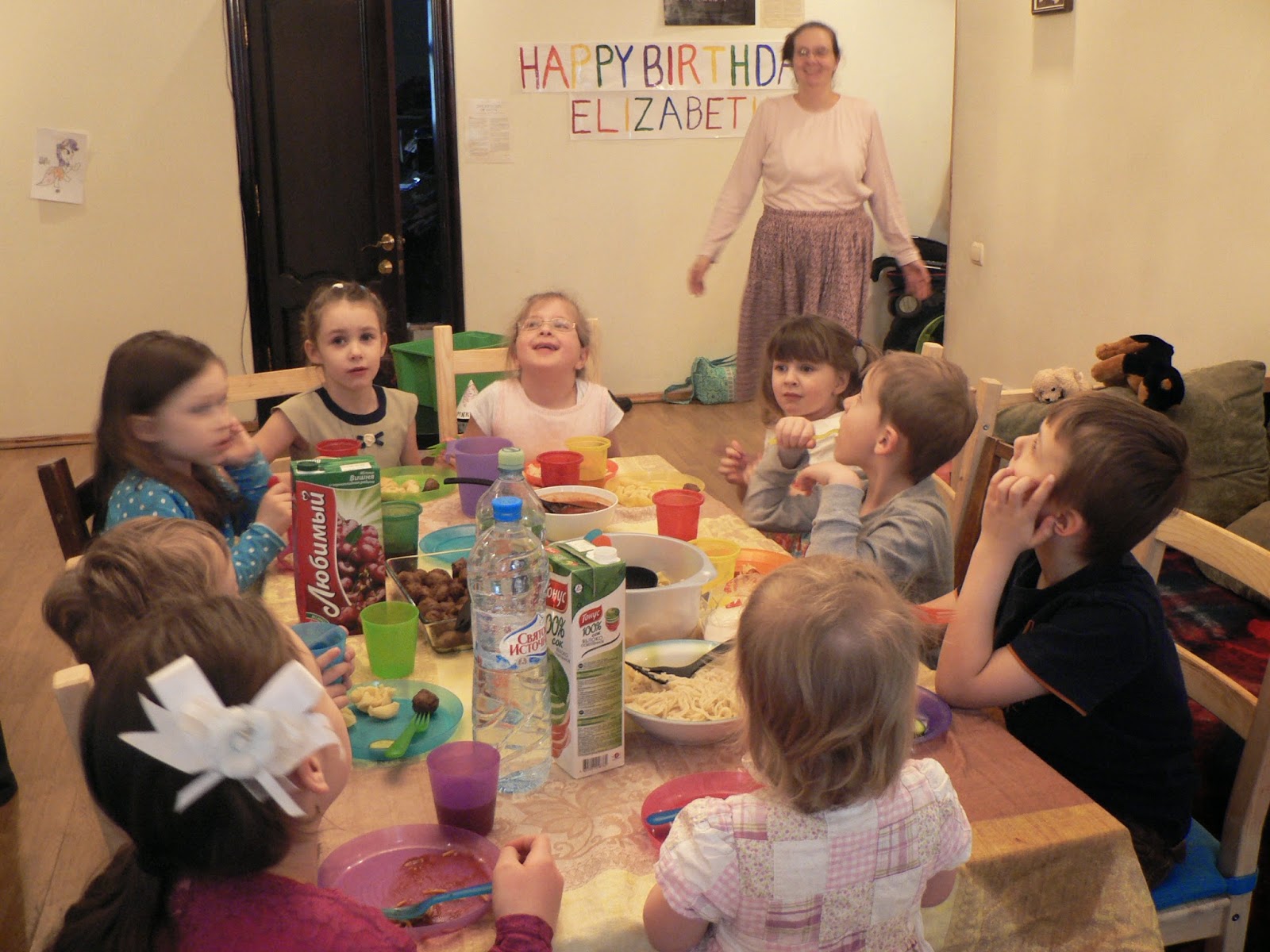 E tried having a My Little Pony themed party, with stuff printed out from the internet.  Coloring pages, pin the tail on the horse, playing trains, the usual kid stuff.  Some of the kids liked the activities: 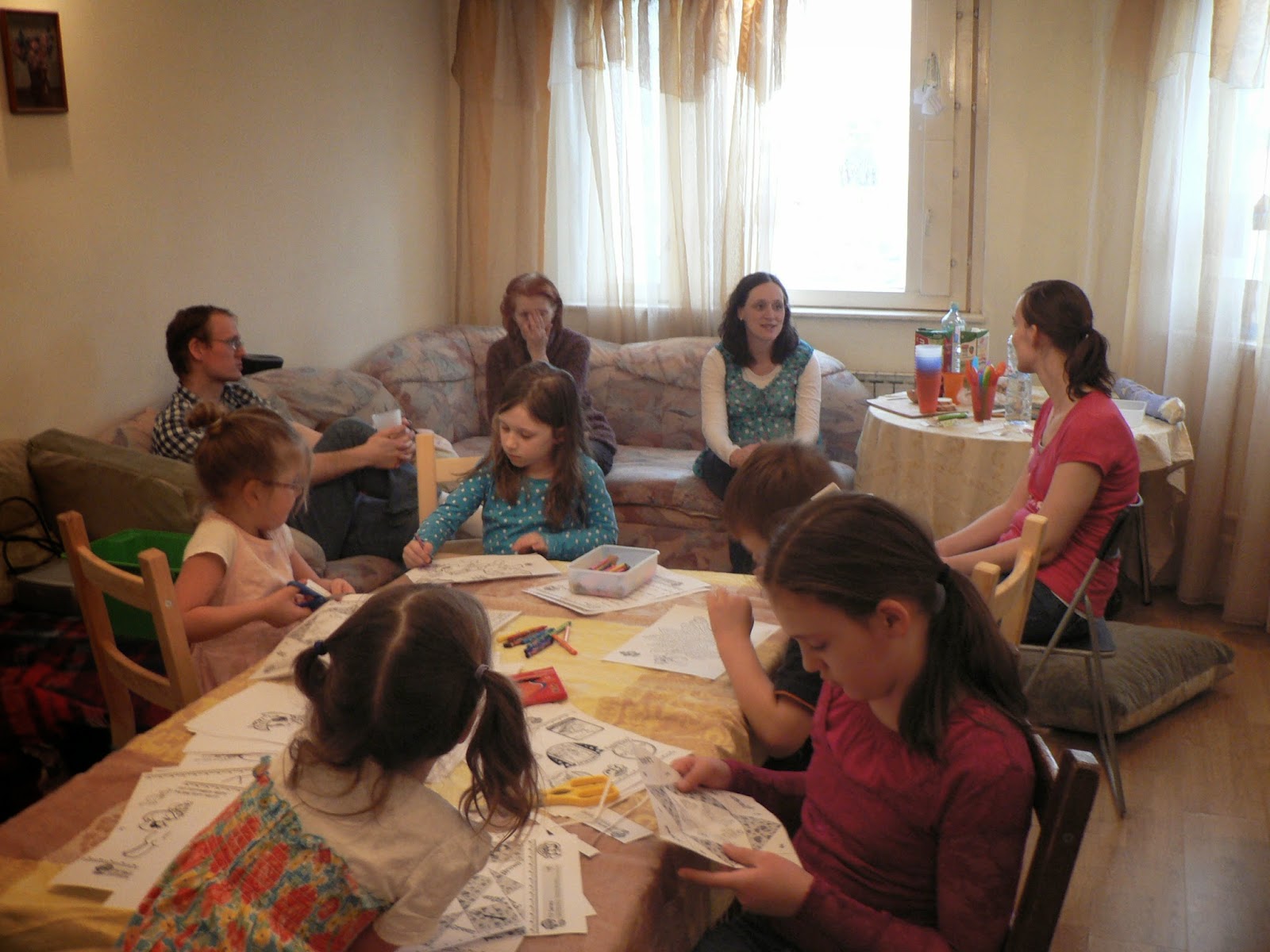 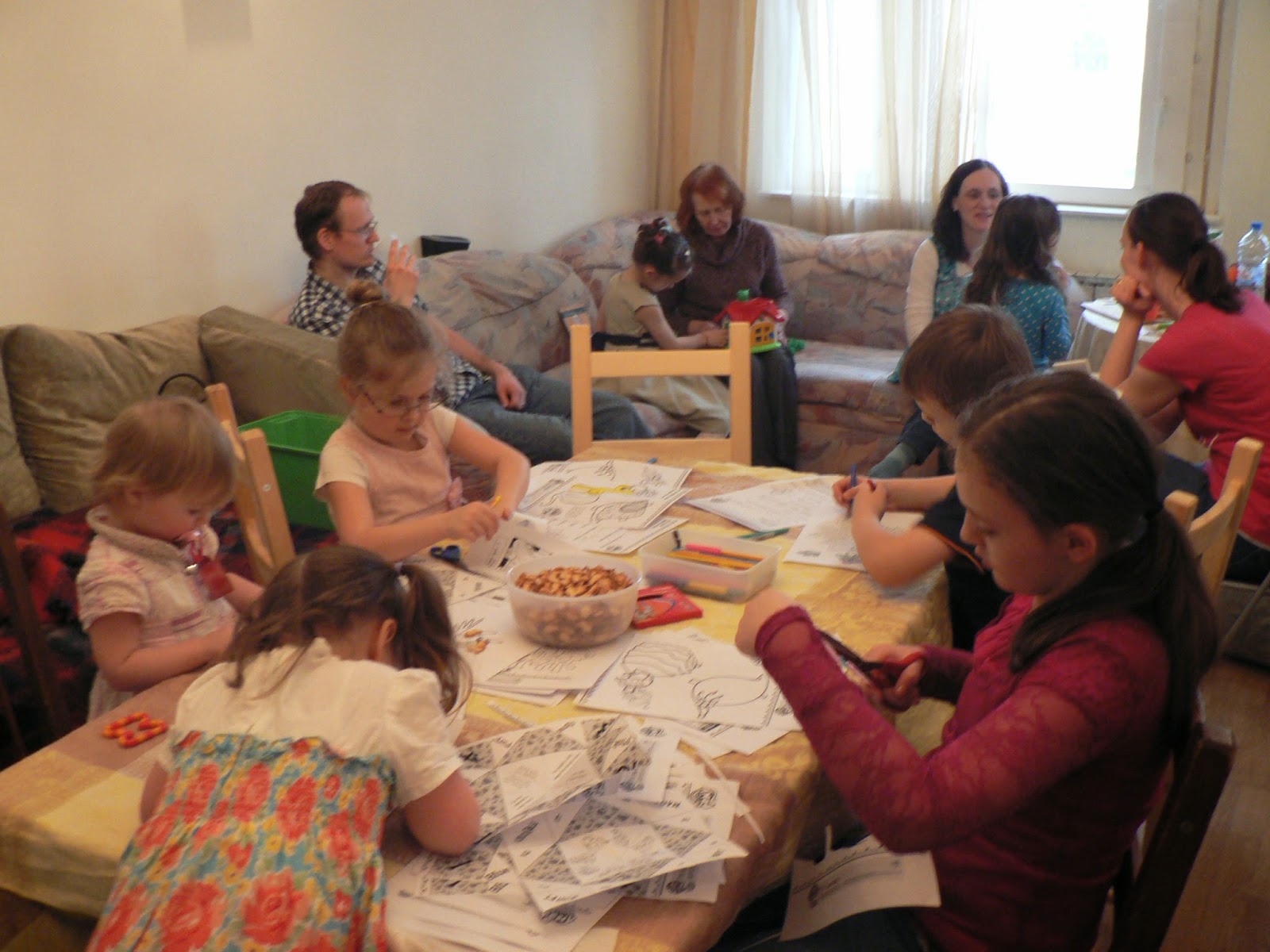 And some just wanted to play with someone else's toys (which are always more interesting than your own toys): 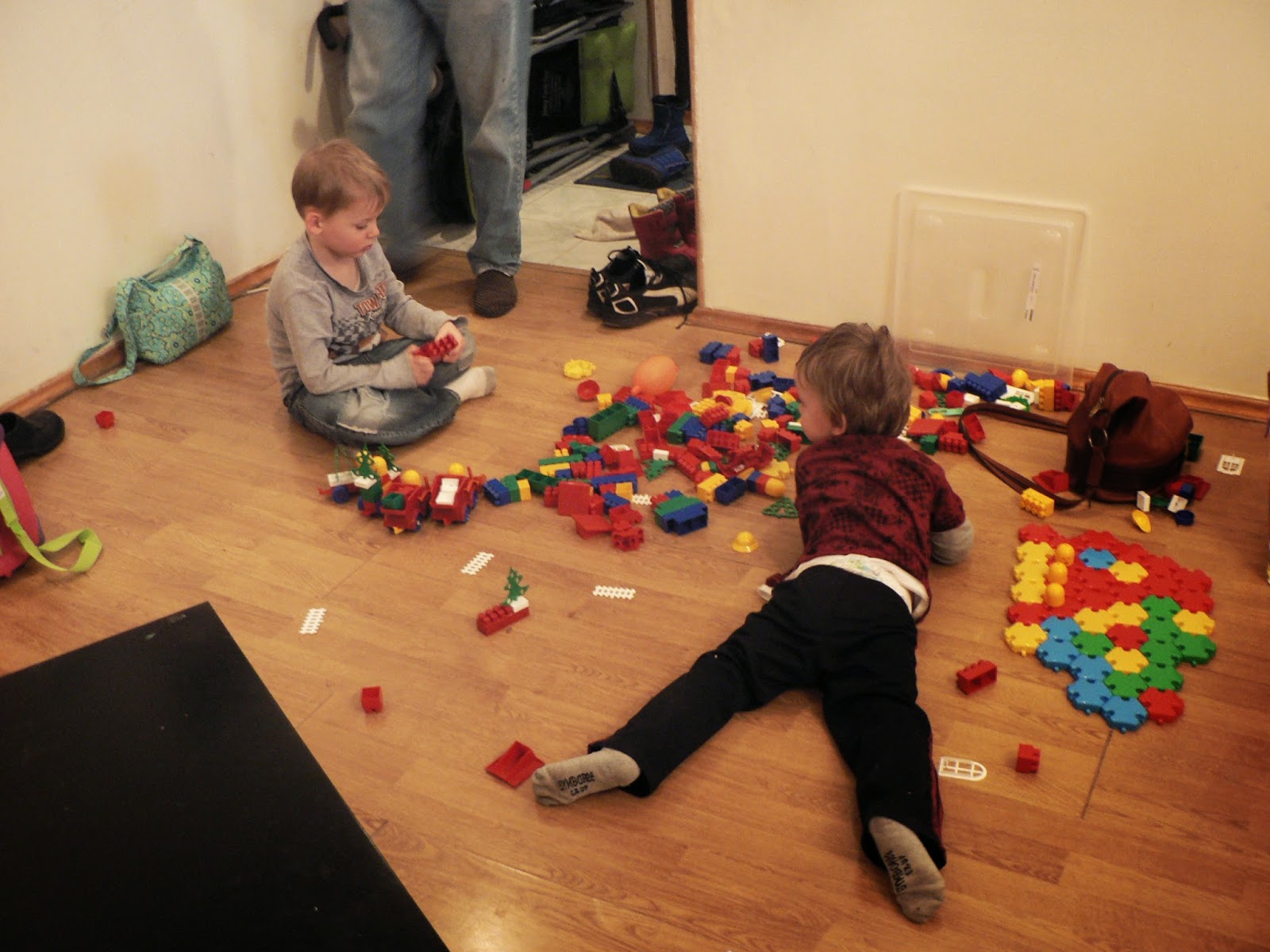 The one "different" thing we tried was a pinyata.  It was a mess to make, and looked stupid, since all we did was papier mache over a balloon. In addition to candies, there were also little tiny plastic animals that fell out. The other Americans thought it was fun to, but it was very bizarre for the little Russian girl.  (They had never seen something like this, and our explanation that it was something from Mexico didn't help either.) 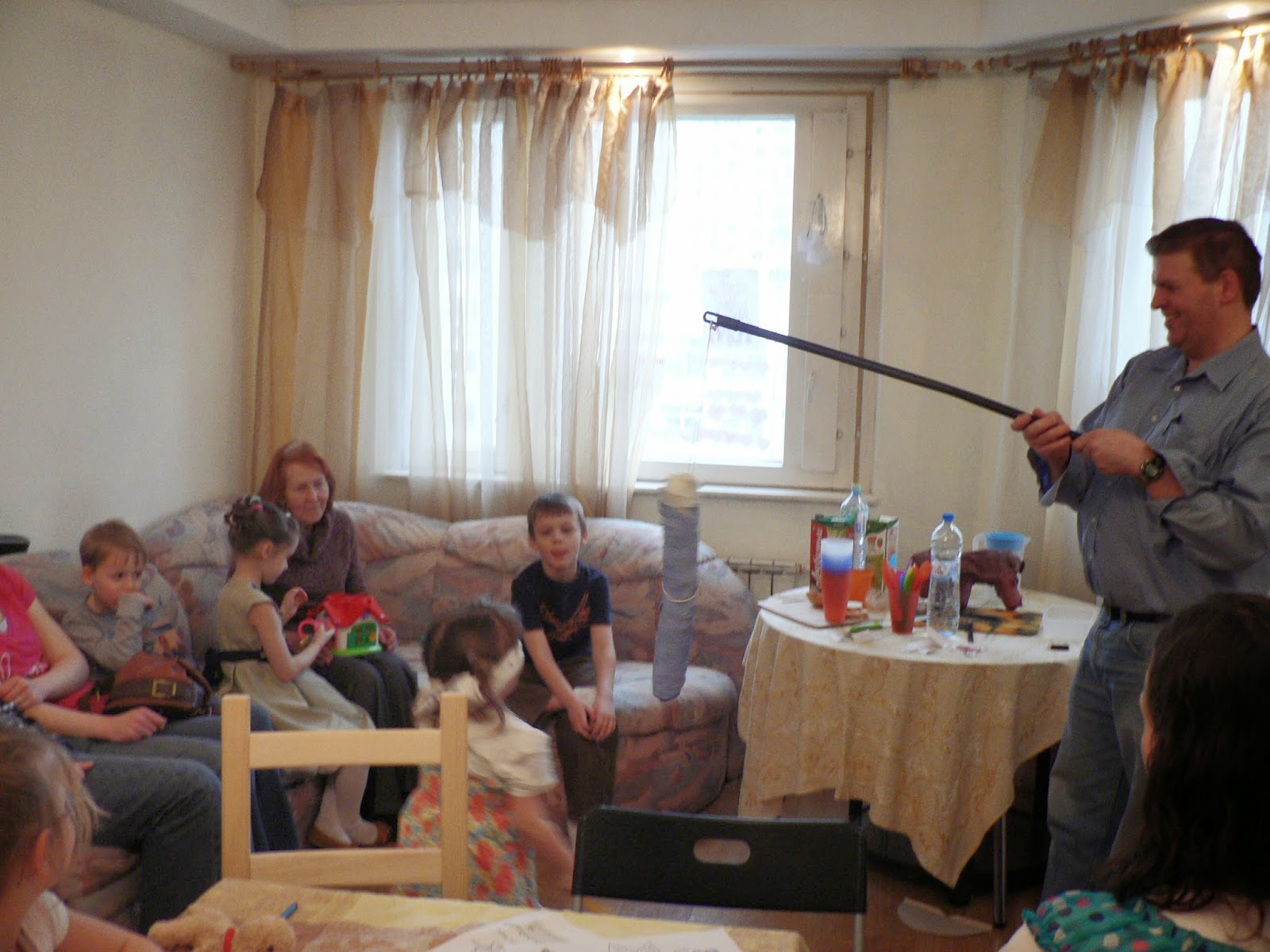 Of course then there was the requisite cake and ice cream.  Parent-photographers out there will understand when we explain that trying to get a decent picture of a kid actually blowing out the candles is pretty much impossible, by the time you turn out the lights for the candles and have a dozen moving children around a table.  This photo is when all the kids watched the candles re-light themselves after E blew them out. 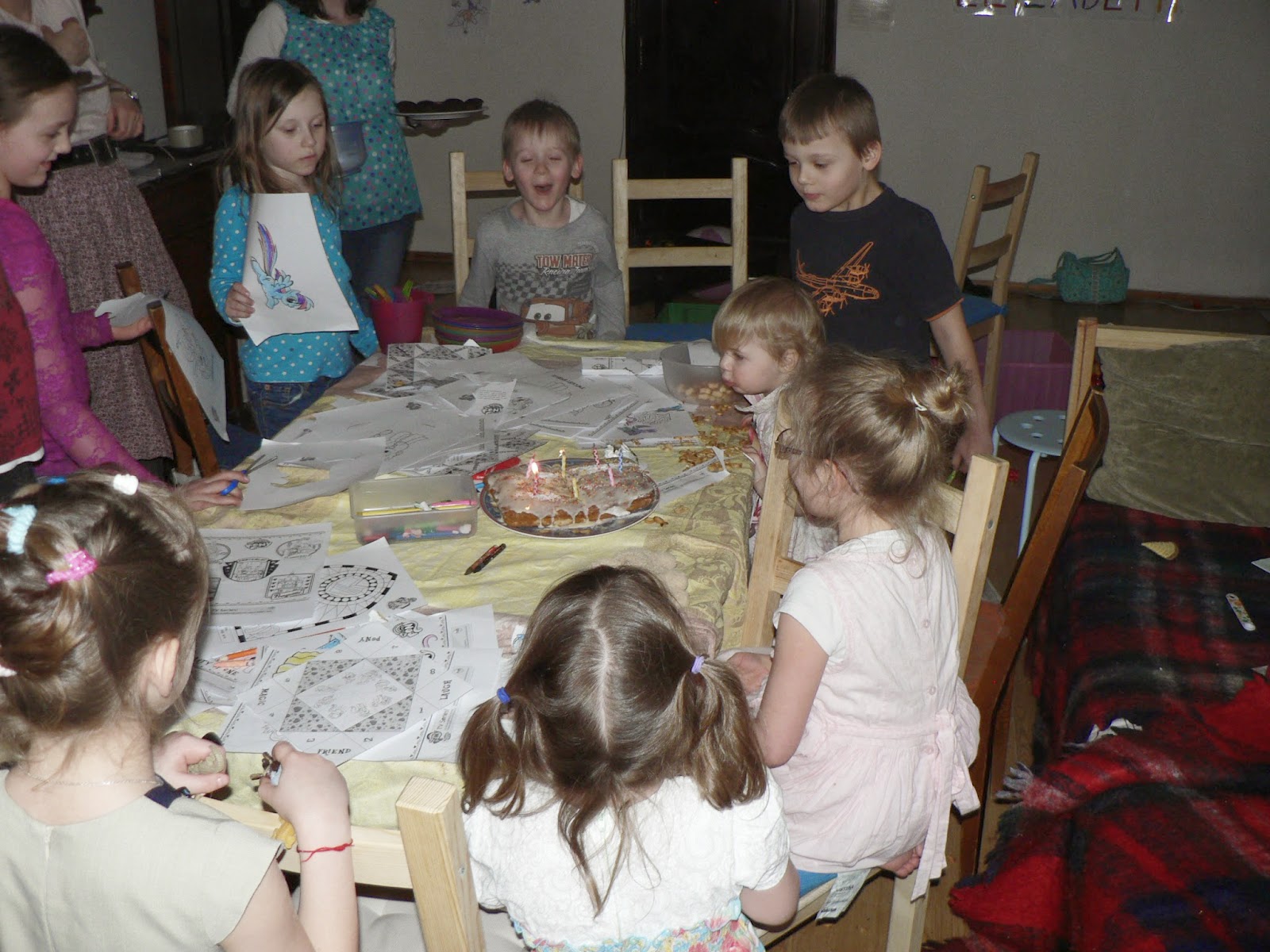 E's friend Kate (also American) gave E the wig her mom had made her for the previous halloween. E loves this movie and still enjoys dress up now and then (despite being a "big kid"). 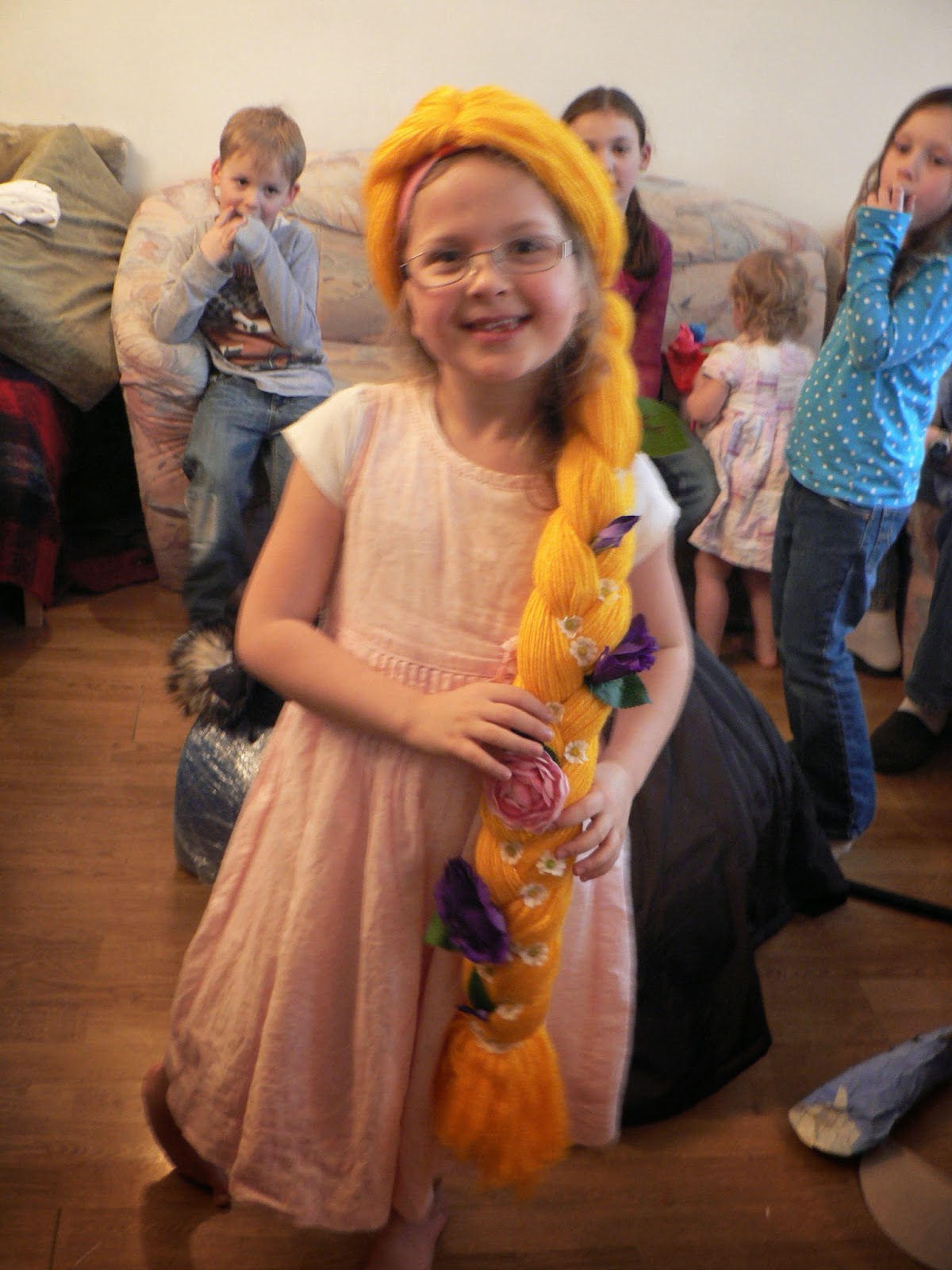 This is E sitting in one of her favorite gifts (a soft stuffed chair, which she uses for a reading chair), with her Russian friend giving her gifts to E). 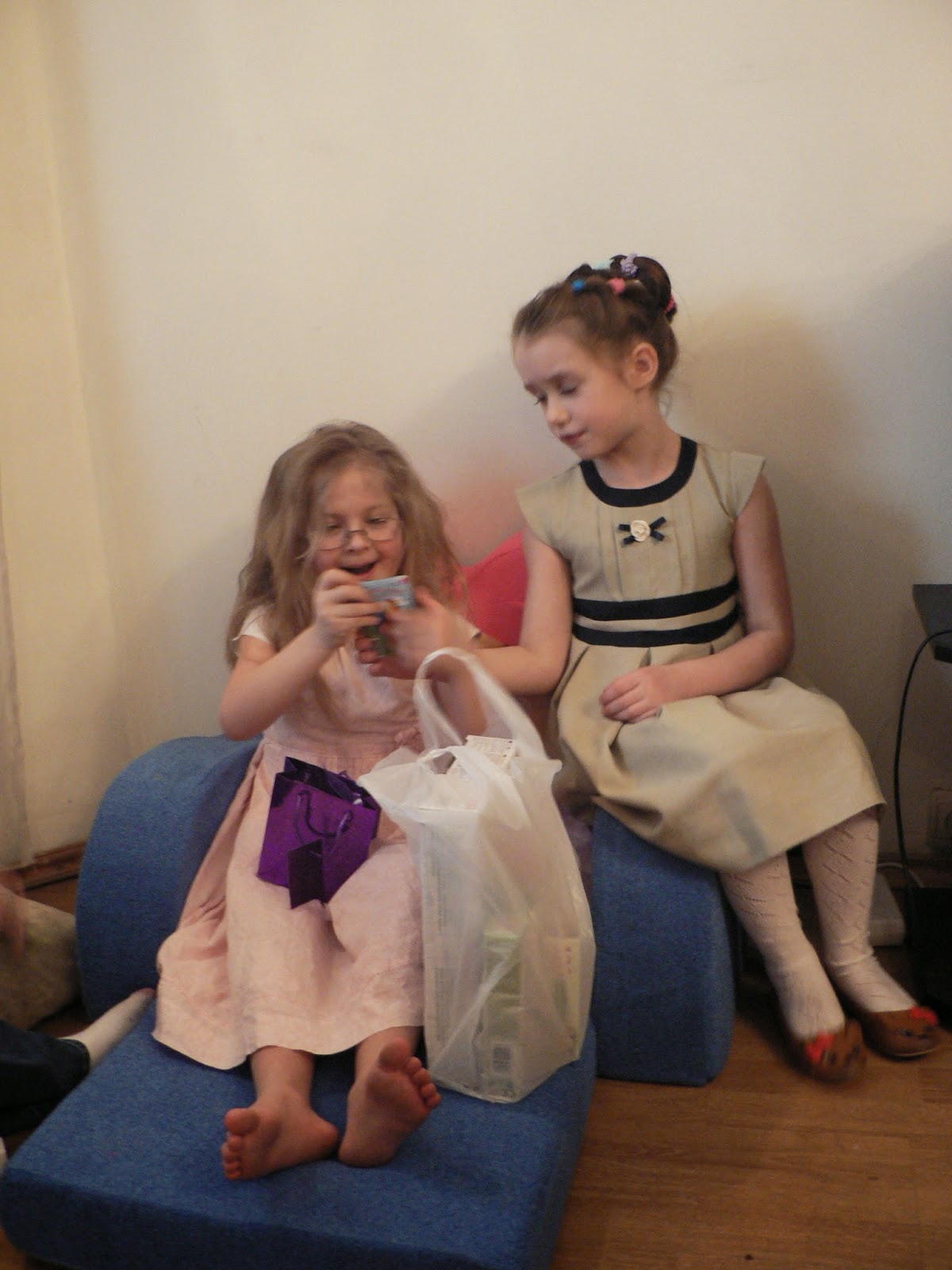 Note please the contrast between Aurora's hair and clothes and E's.  This about sums up the difference between kids in US and kids in Russia.  In Russia, all the girls always have their hair done super nice and always dress up fancy for a birthday party.


And of course, the party was a big success for the smallest one, who grabbed lots of cake while no one was looking… 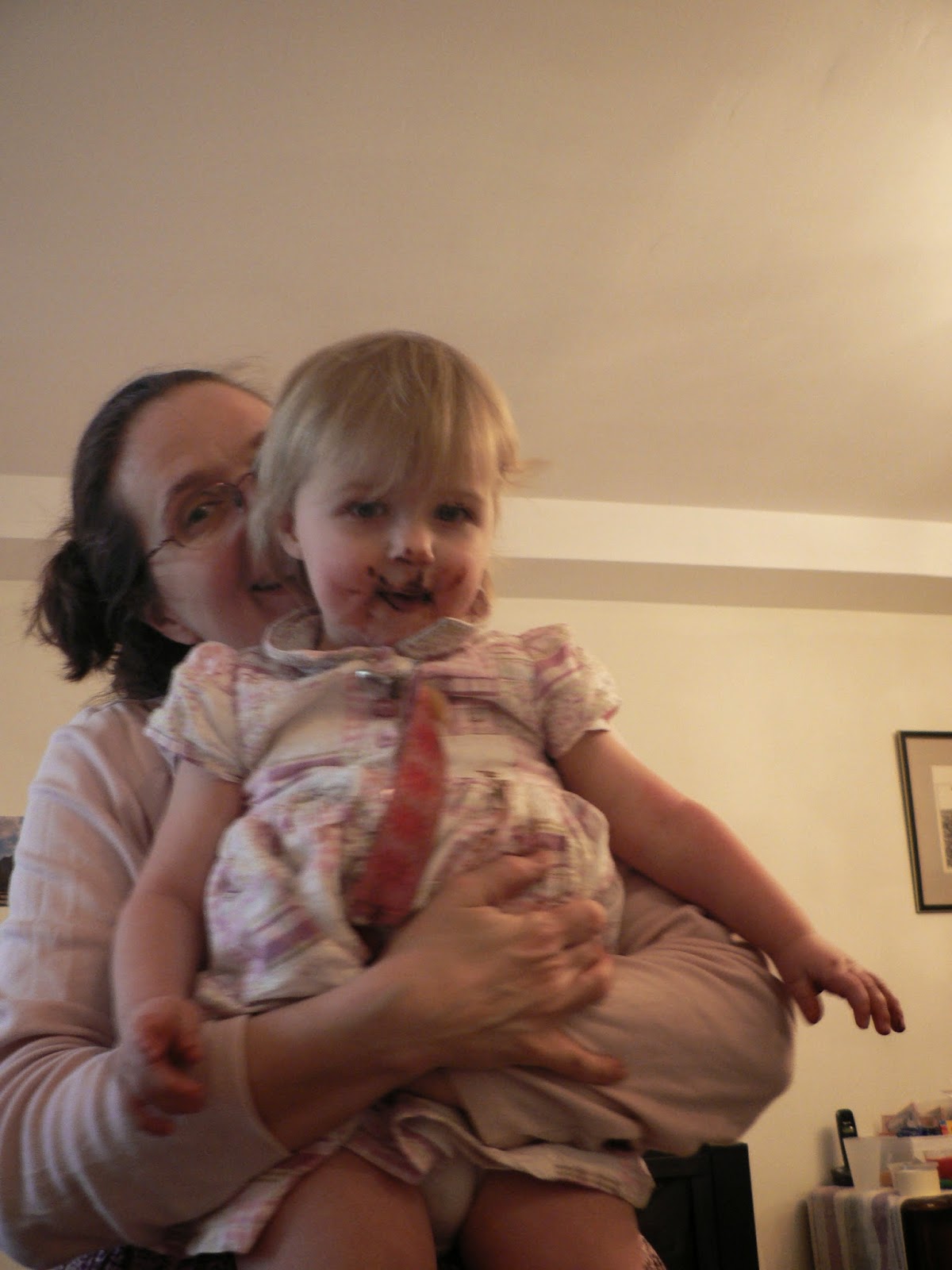 We forgot to take a posed photo with all our guests before they left.  This is a few of them: 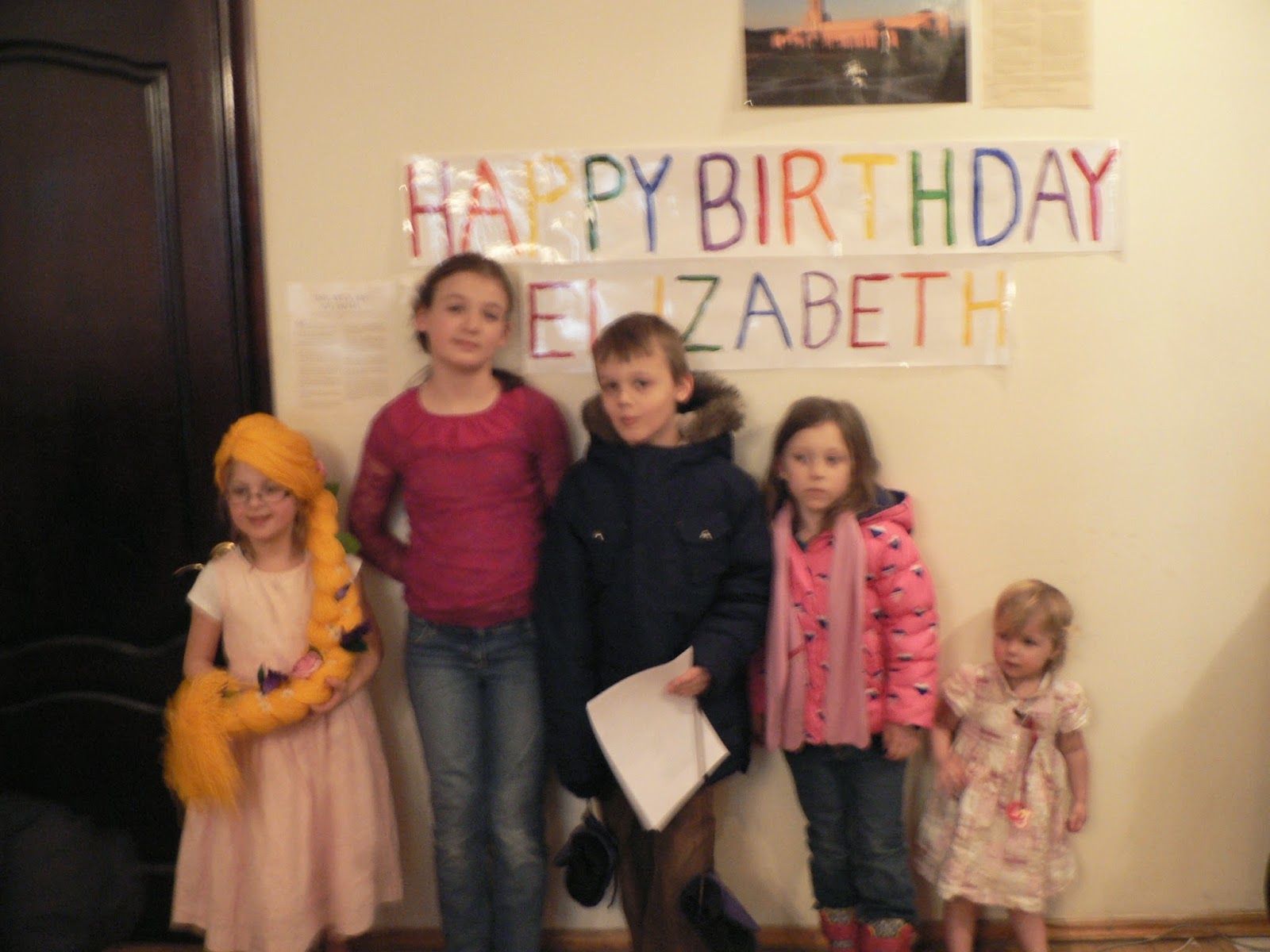 
Posted by RussiawithKids at 11:30 AM No comments:

Dress Up -- makes it all worth it

Before we left the country, I was using a borrowed sewing machine double time, trying to finish up projects since I did not know when I would see a sewing machine again.

One of the projects was to finish a pioneer bonnet and dress for the youngest, who wasn't around when I made the other girls hats.  So, here are the older girls in their pioneer dresses, bonnets, and aprons, a long way from the plains.  One Trunki and one toy box with wheels serve as wagons. 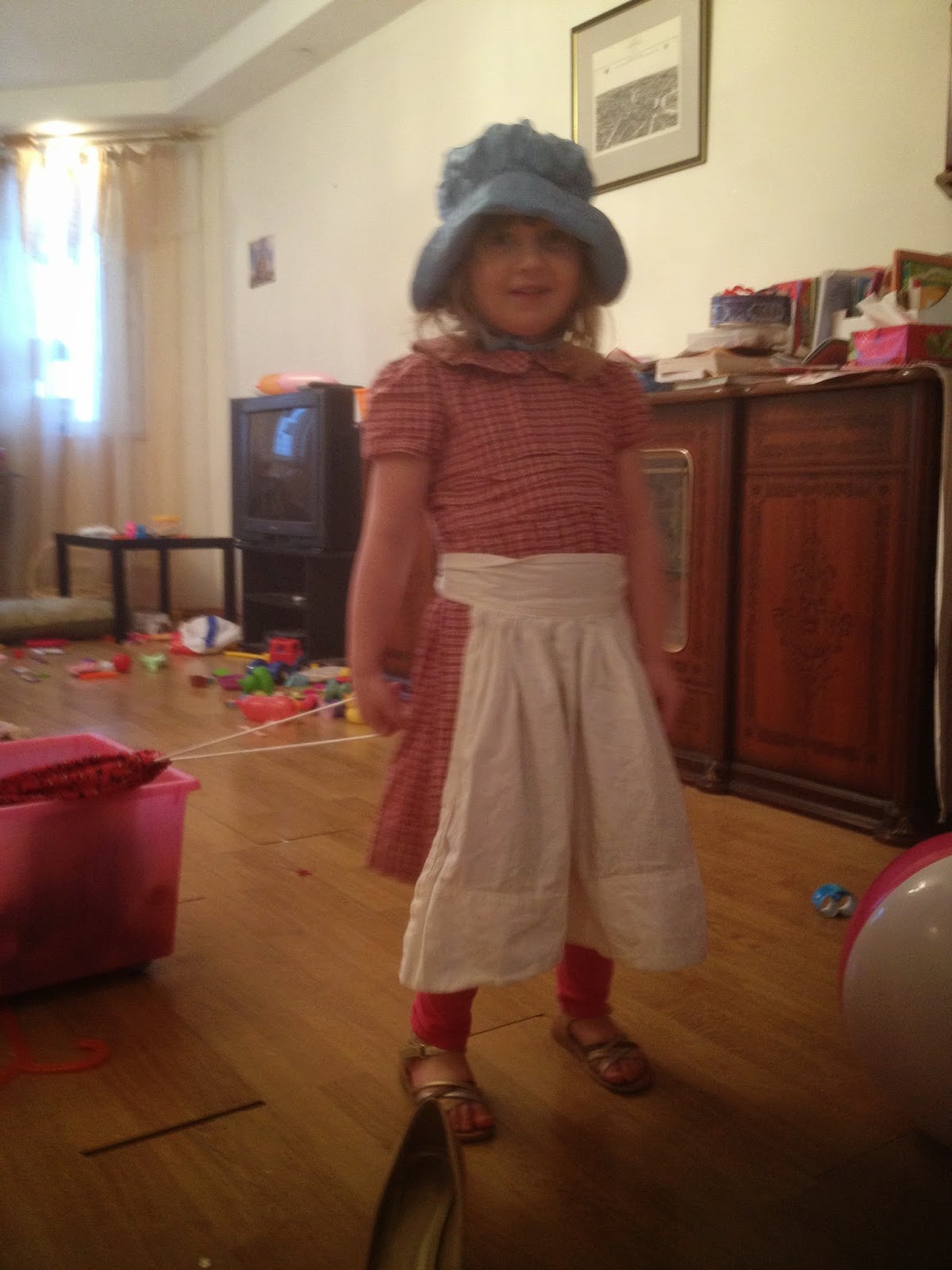 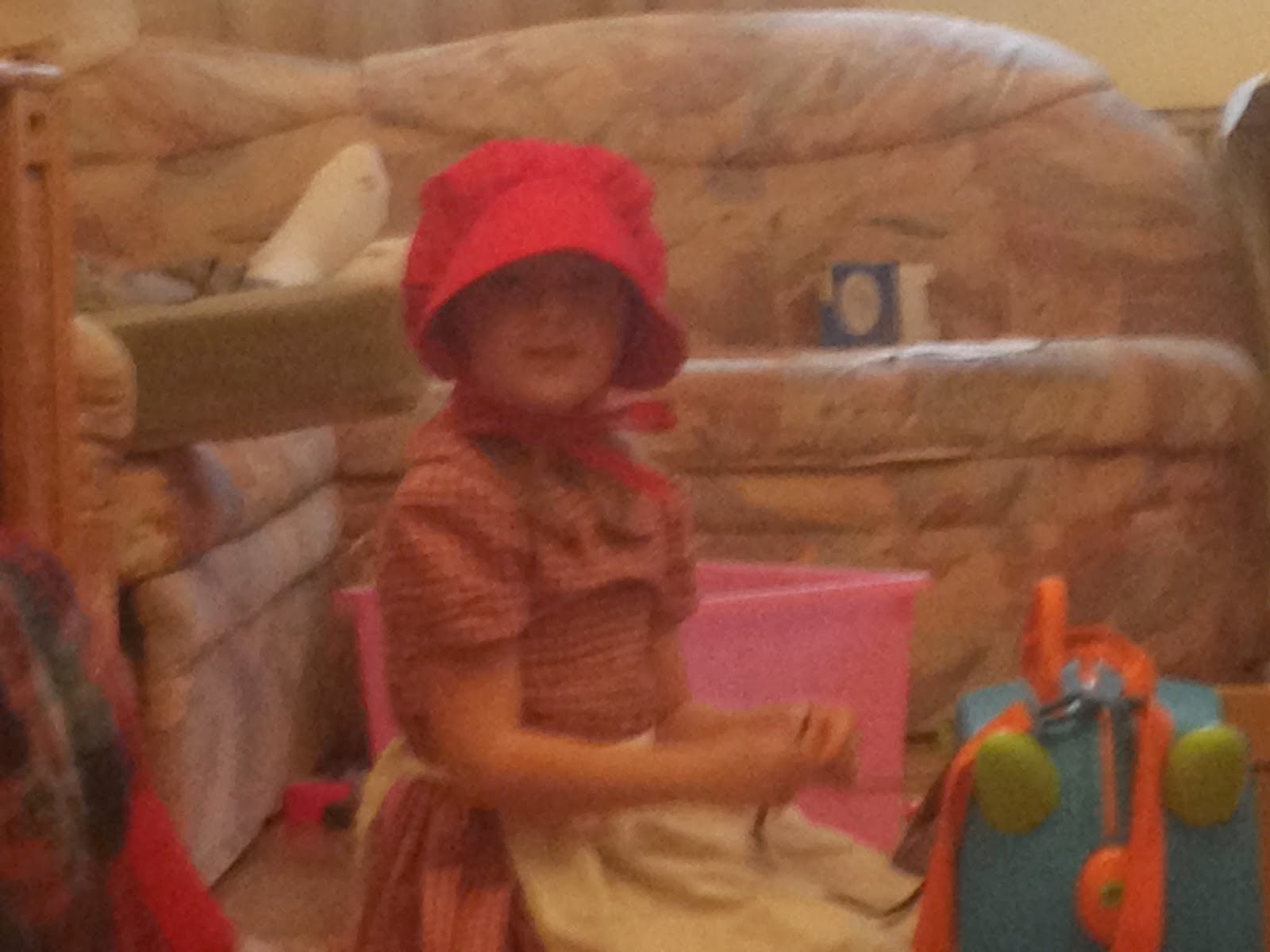 This is not the dress I made for the youngest (hers matches the other dresses) but it looks kinda cute with the hat I threw together last summer. And this photo alone is worth the effort: 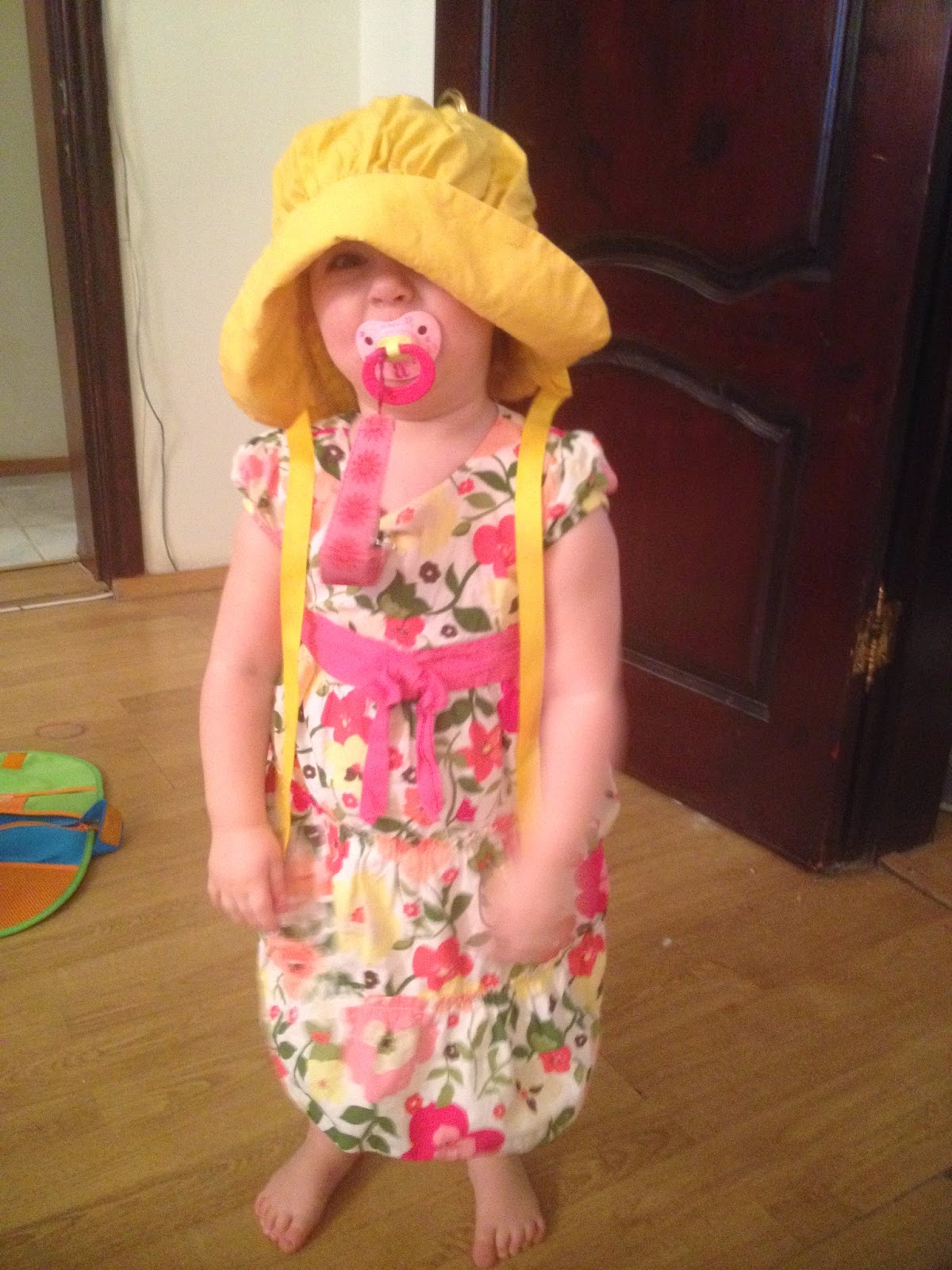 Posted by RussiawithKids at 11:00 AM No comments:

The Tale of the New Oven

When we moved into this apartment in October 2013, we noticed the oven/stove combo was none too efficient.  Once, it took 4 1/2 hours to semi cook a raw chicken (fresh, not frozen).  Finally, we borrowed an oven thermometer to test the oven.  When we set the oven for 450 F, after 3 hours, it had heated up to almost 275 F.  Not enough to really cook by.  Brown? Maybe.  Melt cheese? Probably (if you had the right kind of cheeses here, which we don't).  But cook a casserole?  Hardly.  Not to mention never getting up to the temperature needed to safely cook raw meat.

So, we spent months limping along with heating up ready made meals (which with kids translates to meatballs and chicken nuggets).

Finally we were able to coordinate with the owner (who lives in a foreign country) to approve the charges of an oven to be taken off our next month's rent.  But then we had to comparison shop prices and features.  We finally found a couple of models, emailed the owner's daughter (the only one in the communication chain with an email address), and they were deemed "too expensive".  They countered with the cheapest thing on the market, which fortunately didn't fit the space so we could eliminate it from consideration.

Finally A (daddy) found an internet store which sold the model we desired at a price which was much less than the brick store we had visited.  Still more than the landlord had hoped, but so much less than our first suggestion that they eventually agreed.

So, A placed the order.  But it was the holidays (Jan 1-9 no one works in Russia).  So at the end of the holidays, the internet store arranged for delivery of the new oven (of course delivery is extra).  Of course, coming in a truck, they were subject to Moscow crazy traffic, so they couldn't give us anything more precise than a delivery date (no time).  At last it arrived, the delivery guys hauled it up in the elevator, cut open the shrink wrap and styrofoam, and we paid cash for the oven and delivery.

And there it sat until the next day.  Installation of the oven is extra.  And since delivery couldn't be guaranteed at a certain time, the installer couldn't come until the following day.  The kitchen isn't very big, so the oven took up most of it.  At first A thought he could just shift it into position and plug it in himself.  How hard can "installation" be?

Pretty hard.  The oven had an electrical cord coming out the back which looked "hacked off", i.e., just insulated wire with metal ends sticking out, no plug.

But when we shifted the old oven out of its place (not covered in delivery) there wasn't really an outlet to "plug" into either.  The old oven had been "installed" by screwing the loose wire to the wall electrical feed.  Pretty scary.

So, when the installer came the next day, he could be much more precise about his arrival because he took the metro (the best thing about Moscow, by far, and totally reliable as to time).  He brought all the relevant missing pieces (I guess they are used to this).  He installed a heavy duty outlet onto the wall and wired in a real plug onto the oven.  Yah, done.  (Now we see why it's an extra charge).

Only problem?  The outlet with the oven plug protrudes at least 3 inches from the wall.  That means the only thing that can go in front of the plug is the oven itself (which has an overhang in the back to cover the space between the back of the machine and the wall.  So we had to rearrange the other cabinets to put the oven in its place--the cabinets are flush against the wall.

When the landlord's agent next came by, we proudly showed her the gleaming new oven. She got upset it was right next to the refrigerator.  (In her world, both of those kind of things "leak" too much hot/cold to be put next to each other). 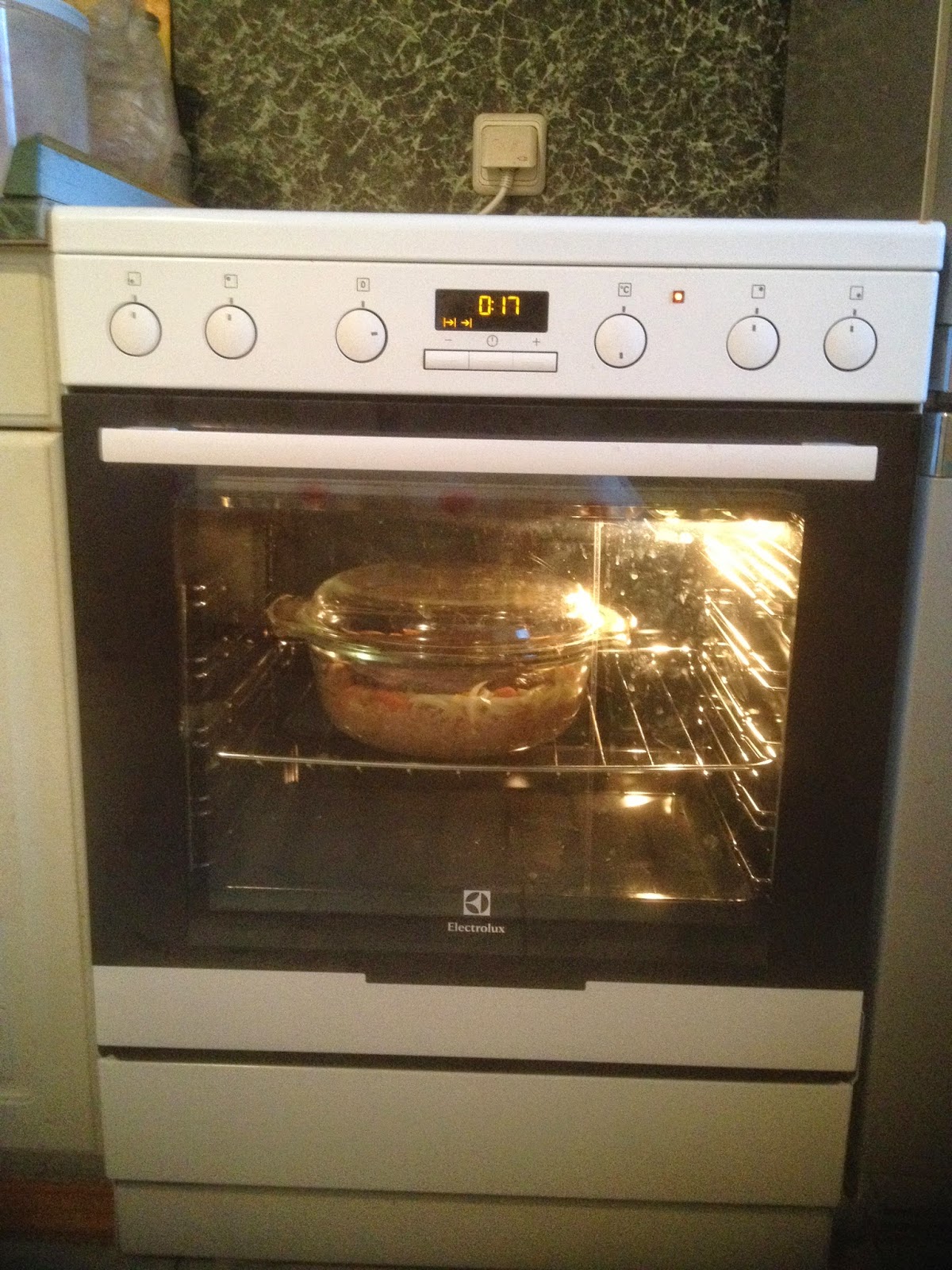 But we like it.  Now we can cook for real.  Best part?  "Delayed start" regime.   Put a roast in the oven before the marathon day we call Sundays around here (we are gone about 6 hours), come home and the roast has just finished cooking.   You can see the timer in the photo, counting down to the finish.

Hot meal at the end of a long day? Priceless.


Posted by RussiawithKids at 12:00 PM No comments:

You only turn 7 once…

E's long awaited birthday happened on a day of work and detskii sad, so there wasn't much time on the actual day to do much.  But you can't not celebrate a child's birthday.

So she wore a special dress to detskii sad. 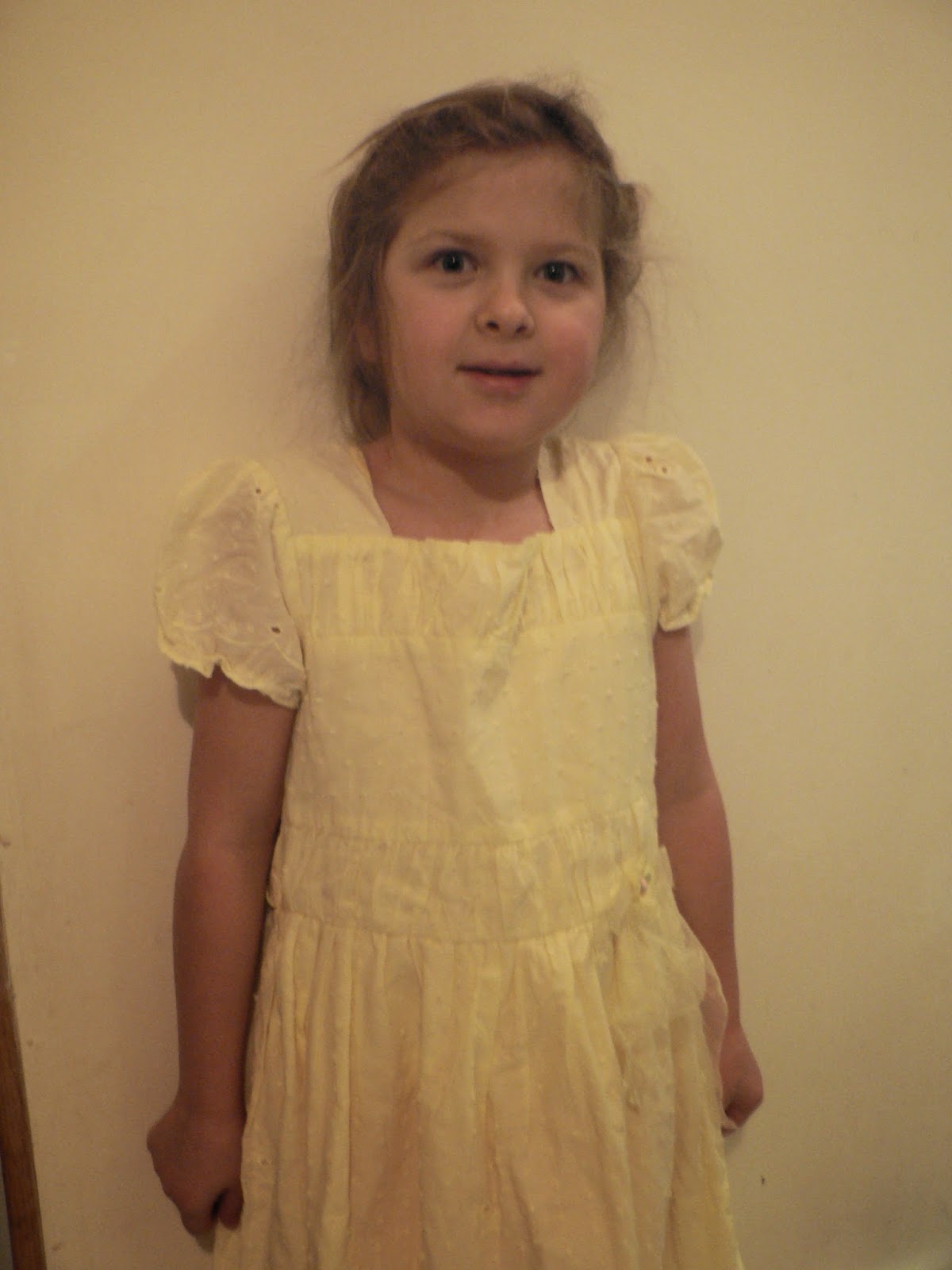 At preschool they sang the requisite song and then they gorged themselves on too many treats brought by a mother who didn't want to be thought stingy in the new group and thought there were 20 kids, when really only 8 or 10 were there that day.


At home in the evening, she really liked the cake her Mom made (or she liked the candles): 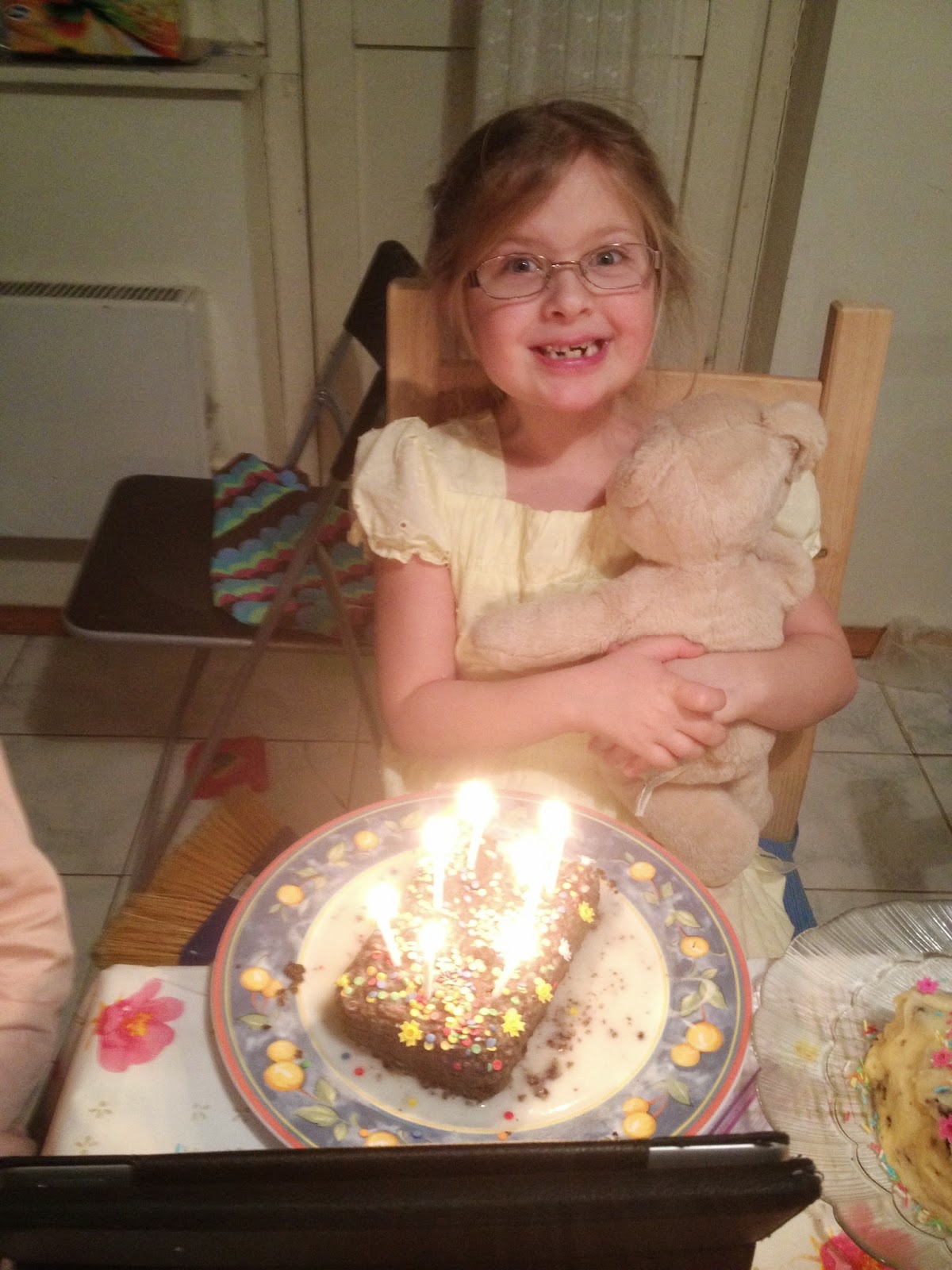 And blowing them out (this is right before she saw them light up again--we found those "trick" candles in a shop and they really did relight over and over again!) 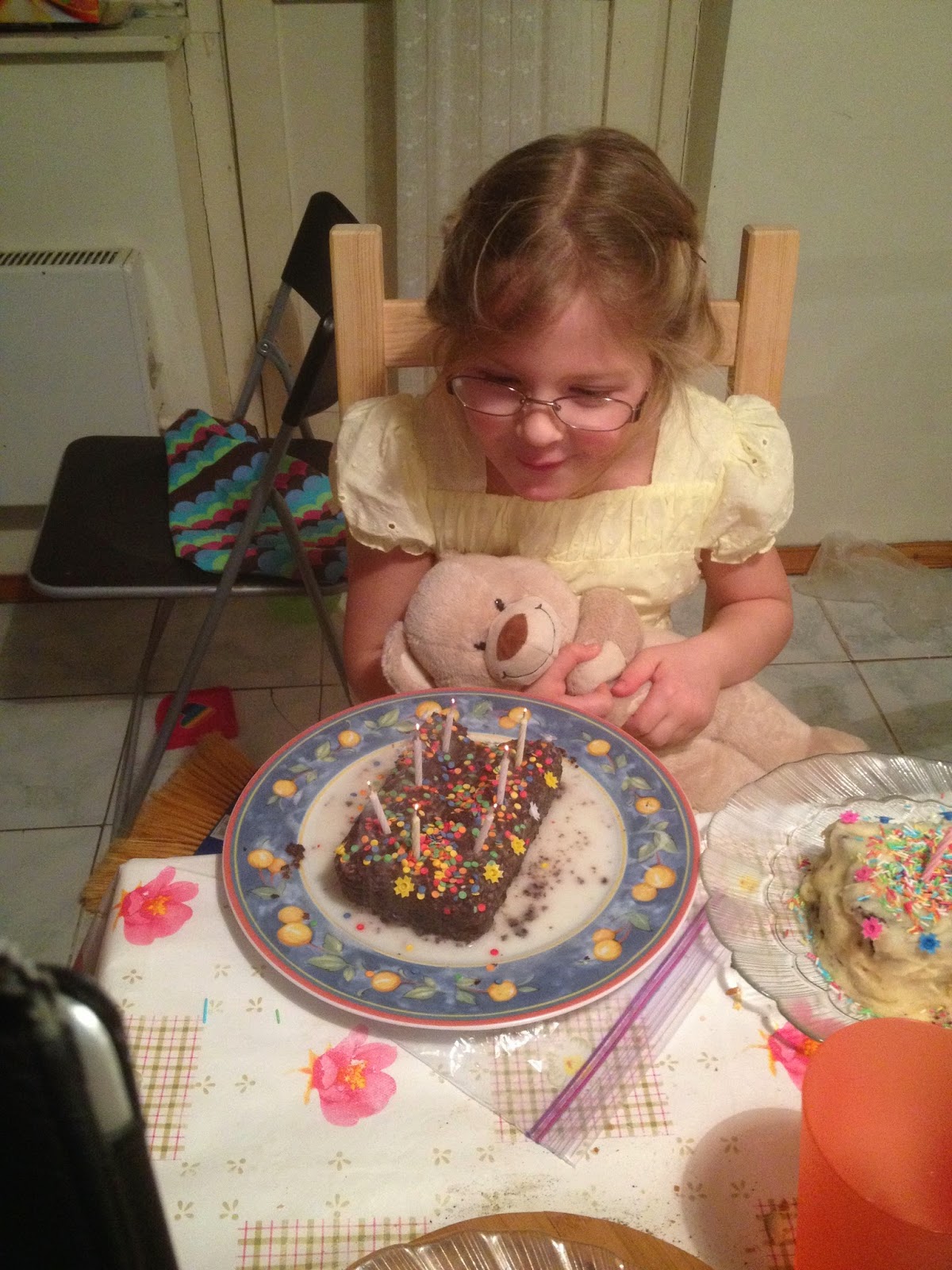 Here is her sister waiting for a piece of cake, while the candles keep relighting… 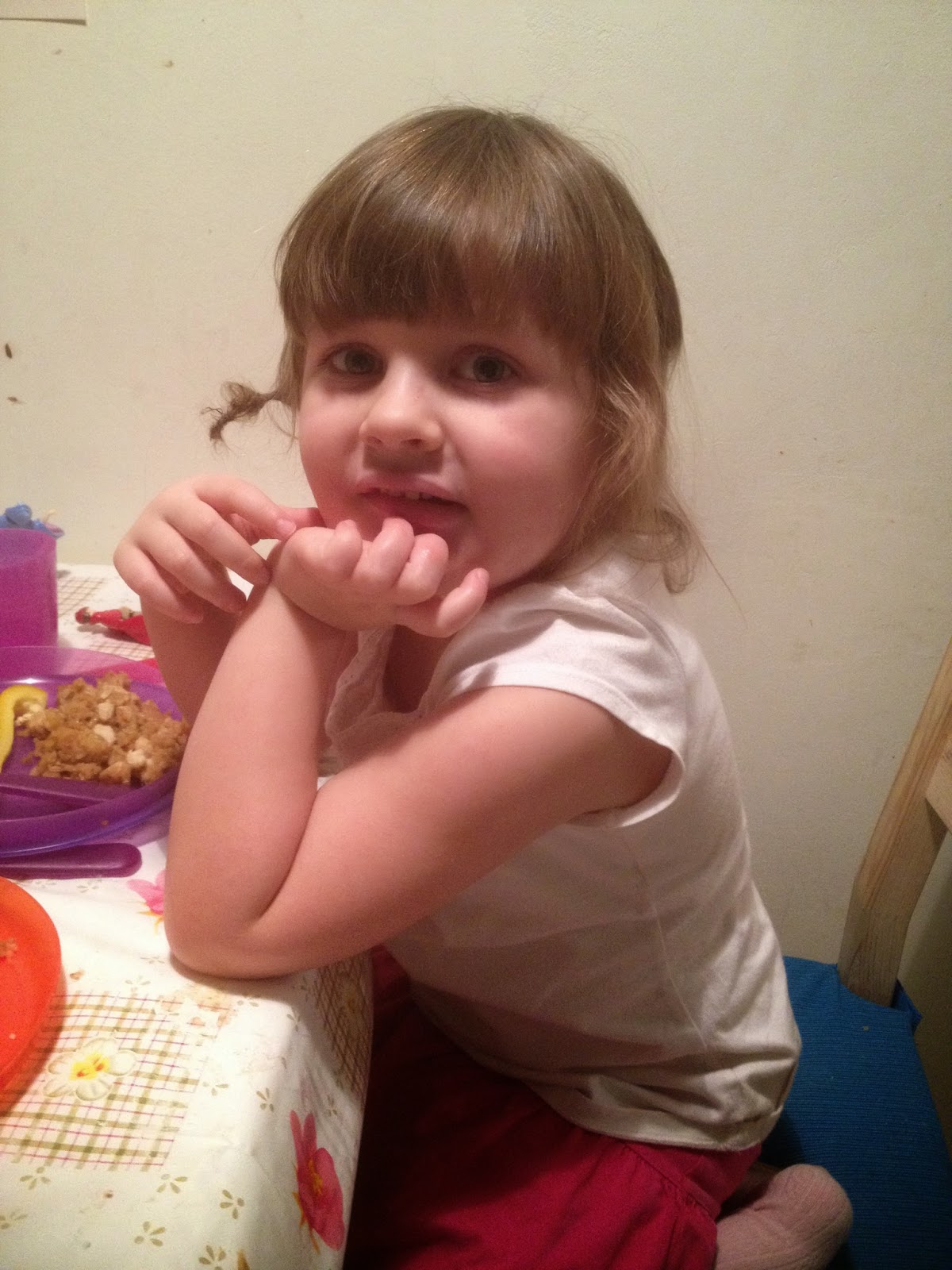 Then E opened a few presents.  This was not her favorite toy, in fact the reverse, because it was the only one she could sit still for a photo op with.  all the other attempted photos she was too excited to sit still for the camera… 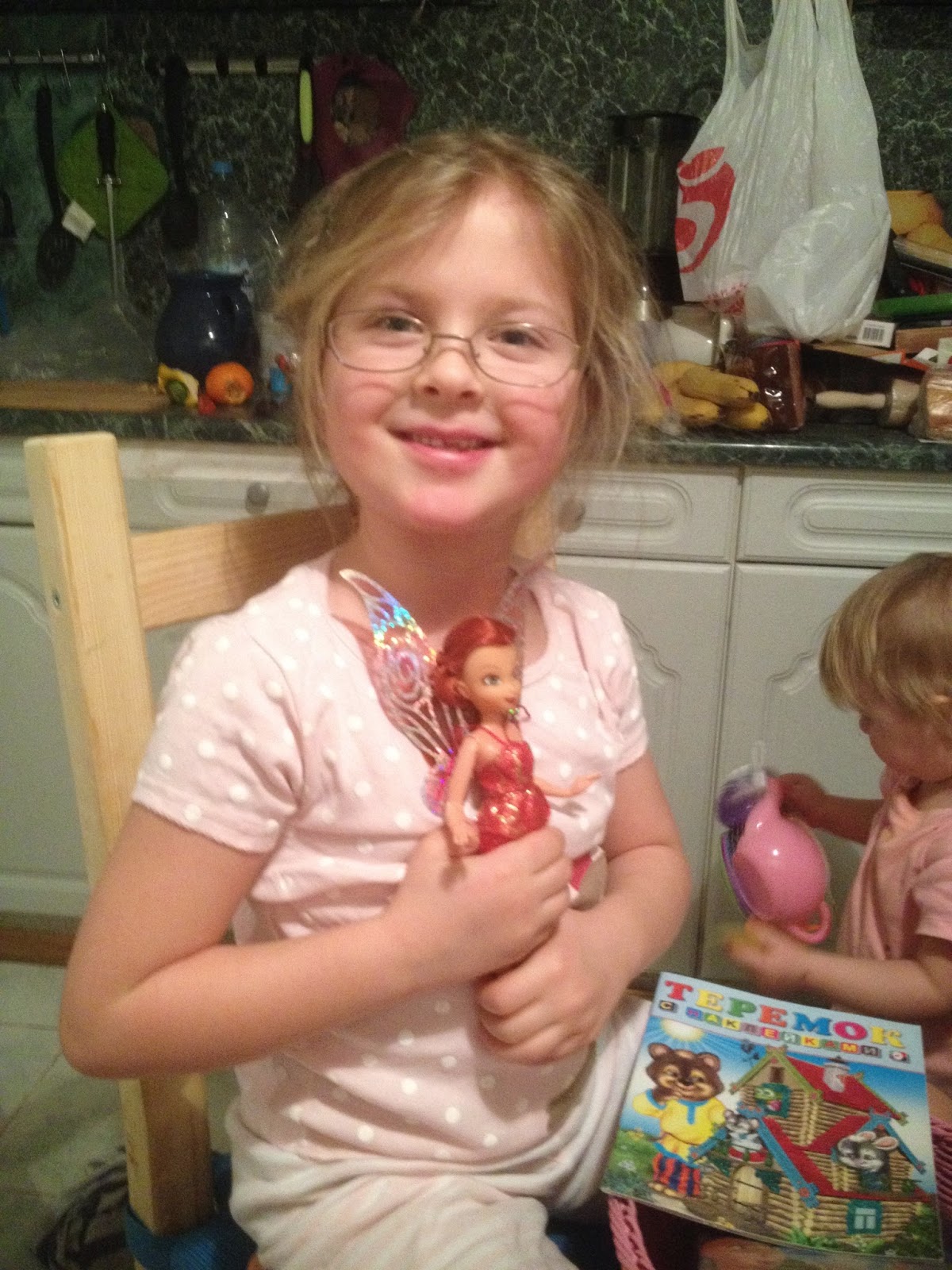 And the only "attendees" at this particular party were all the stuffed animals and dolls (not in the photo, they were waiting on the couch in the other room).   It's dark, but not that late, welcome to winter in Russia.

On a later date, we remembered to take her photo under the banner we put up for the party: 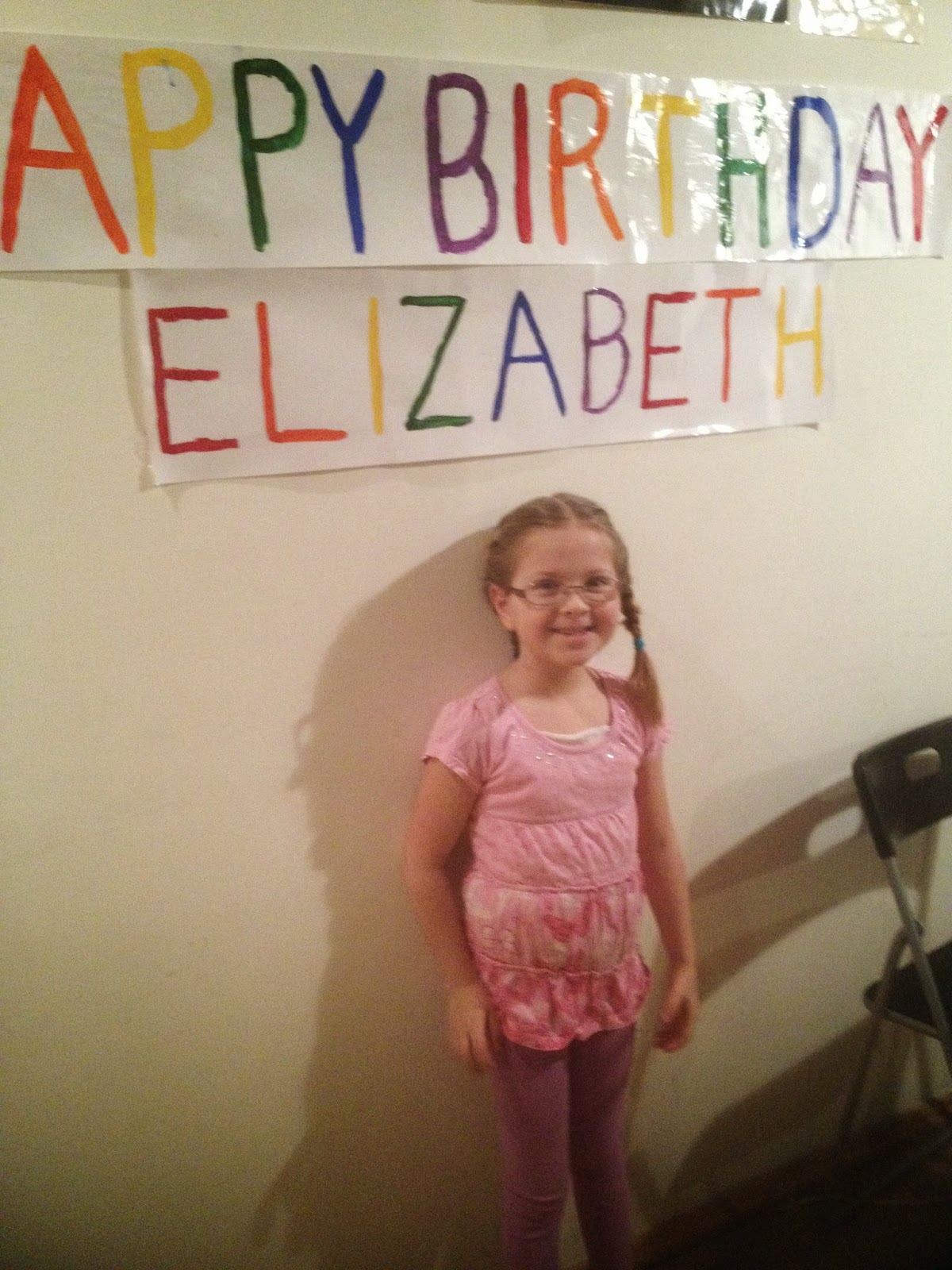